It is said that this is their spiciest flavour yet, topping the ‘Extra Hot’ at the PERi-ometer. 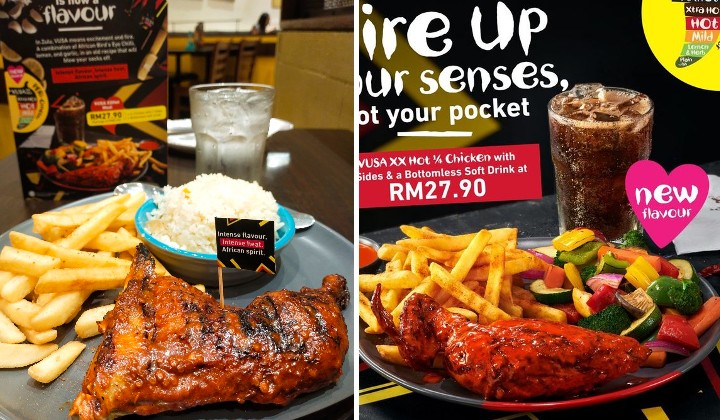 You know, I almost wanted to write my will before trying this meal. I love spicy food but not to the point of going for a ride in the hospital for it.

But just a little taste to know how spicy it is couldn’t hurt, right?

According to Nando’s, their new Vusa Hot XXHot is the fiercest flavour yet, being the highest on their PERi-ometer, above the ‘Extra Hot Peri-Peri’ level.

In Zulu, Vusa means “excitement and fire”, hence, this South African food-inspired restaurant recently came out with a new flavour with a recipe featuring a combination of African Bird’s Eye Chilli, lemon and garlic. They claimed not to put any magma inside because apparently, the flavour is said to be intense.

Okay, while praying to God that I don’t get hospitalized (they did a good job of spooking me out), I was ready to get my socks blown off! Let’s go.

Nandos already has a collection of sauces ranging from Lemon & Herb (Extra Mild), Medium, Garlic (Medium), Hot, Extra Hot and Extra Extra Hot. I decided to put a bit of all on a plate to test the spiciness. So far all of the sauces have their acidity in them but my favourite would be the hot one. The spicier it gets the more citrusy it gets also, so for the extra hot, it just got too citrusy for my liking.

For the Vusa meal, it meal comes in a set featuring a 1/4 chicken, two sides and a bottomless drink for RM27.90. You can choose whatever sides you want and since I’m hungry, I chose the Mediterranean Rice and Peri-Peri Chips (Fries).

The Vusa sauce is coated on the chicken though, there’s no bottle that you can take to your place and add the sauce on. The colour of the chicken was terrifying at first. It was a dark red and you could see a lot of chilli seeds coating the chicken.

The chicken was, of course, cooked to perfection, juicy and tender and along with the Vusa sauce, it pairs really well. It was not that spicy at first but you’ll get an aftertaste of it later on. And there’s the sourness too after it probably because of the lemon. The only difference between the vusa sauce and extra hot sauce was the Vusa sauce is a bit more sour and bitter than the extra hot sauce. And yes I got a slight runny nose too after eating the chicken.

I honestly was expecting something super hot like the Korean Samyang taste or Malaysian Ayam Bakar Maggi taste but this spiciness is in a different category. Those two were spicier, with a ton of umami aftertaste.

Since Nando’s is South African, the spices there differ a bit and their spiciness correlates with acidity. Perhaps, the sour taste is there to balance and soothe out the spiciness. Don’t get me wrong, it was kinda hot, but not hot enough to blow my socks off as they claimed.

It’s actually just hot enough for a filling meal that you can eat with your sides (the rice and chips helped soothe down the spiciness). It was a delicious meal for me really and I recommend this to those who can handle their spice level quite well. You just have to deal with the mild aftertaste that’s mixed with the sourness.

Instead of the hospital, I actually ended up with a happy tummy. If you really want a challenge, I recommend you eating the whole chicken without the sides first, maybe then you’ll get the intense heat they’re talking about.

With that being said, Nandos is actually having a contest on 11 June called the #VusaXXHotDay where you can film yourself eating four Vusa XXHot-flavoured wingettes and drummettes within three minutes or less at any Nandos outlets. Submit the video via Facebook, Instagram or TikTok and tag @NandosMY and #VusaXXHotDay. The top three winners will stand a chance to win 50 meal vouchers from Nandos!

Their Vusa meal is available in outlets nationwide until 4 September 2022 and for selected outlets, you can even get the Bottomless Frozen Yogurt at RM2.90 to soothe down the pepperiness. Try it out for yourself and test whether it’s worthy or not.