The answer is: everything that makes them different. 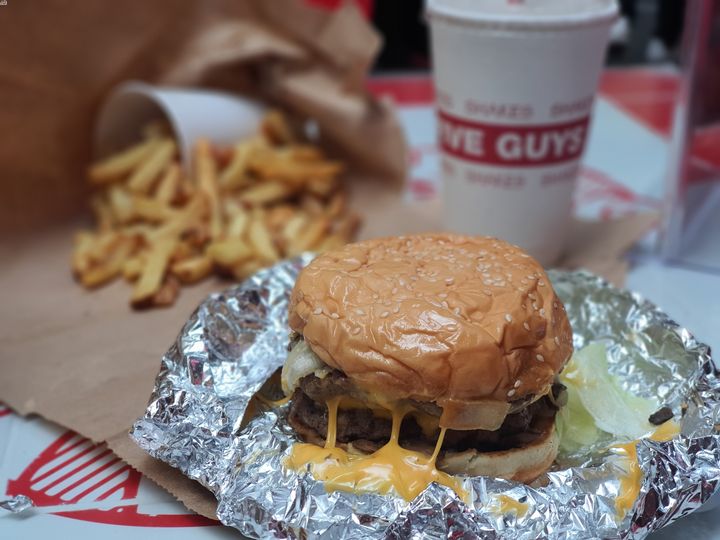 When US-burger chain Five Guys first landed in Malaysia’s Genting Highlands, everyone was super excited. However, most people noted that the burgers were pretty expensive. Although, as a foreign chain in a tourist destination, perhaps it’s to be expected.

Still, now that Five Guys has made its way to the city center in Pavilion KL, many Malaysians still feel that the prices at the burger chain is quite steep, with a basic burger priced at RM33, small fries at RM17, refillable soda at RM13, and milkshakes at RM23.

READ MORE: Why Drive To Genting When You Can Enjoy Five Guys At Pavilion KL

Five Guys, at its core, is extremely simple. They focus only on things that they do well, which is the American staple: burgers and fries, and milkshakes.

Their menu is tiny by fast food standards, with really only two choices: a burger or a burger with cheese (the cheeseburger).

But there’s a myriad of ways to customize your burger, which is exactly the point.

All available toppings are free and unlimited. From tomatoes or grilled mushrooms to pickles or jalapeno peppers, you get to decide how much you want of anything, and it all comes together with the price of the burger.

It’s that customer choice which is really important to us. We want to put control back in the consumer’s pocket.

Despite the simplicity of their menu, each menu item will be crafted exactly the way you want it without extra charge.

If you want 20 pickles on your burger, you’ll get 20 pickles. If you want to mix all 8 milkshake flavours together, then more power to you. And that’s what Five Guys is about.

They also don’t mess with their formula and recipe by keeping it strictly faithful to its original brand. What you taste in Malaysia will be what you taste in the US, or Dubai, or Hong Kong.

When asked, Iain noted that Five Guys will not be pursueing to “localize” the flavours: unlike other burger chains that introduce specialty flavours such as nasi lemak or rendang.

People come to Five Guys for a simple, great American burger. And that’s what they will get here.

So Why Do They Charge So Much?

But the main consideration for Malaysians is always the price, so why exactly do Five Guys charge so much for such a limited menu?

The answer is the fresh ingredients.

Nothing in store is frozen. We only ever use fresh ingredients.

Five Guys ensures that their burgers are served with the best quality: from the never-frozen beef patties to the fresh vegetables in the burgers to the fries, hand-cut in store from potatoes all over the world. (In fact, they have a sign that tells you where the potatoes being served that day originated from.)

In America, Five Guys has a bit of a cult following and is part of the All-American sort of culture. Starting from a neighbourhood store, Five Guys’ roots have always been in their community.

It’s something we hope to be able to achieve here in Malaysia. That Five Guys is your regular burger joint, where you know the people and the food and we know you and your preferences.

The price you pay for is not just for a burger with fresh ingredients: it’s also the service and culture that comes with it.