Arieni Adriena is the founder of Gula Cakery, which now has 6 outlets in the span of 6 years. 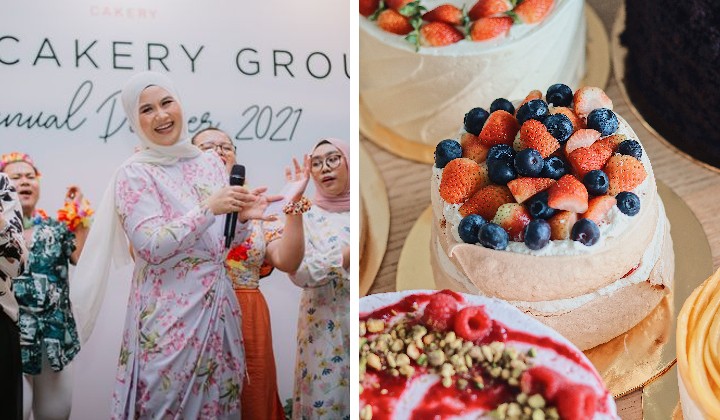 If you’re living in the Klang Valley, you might have heard of a cakery named Gula Cakery. If you haven’t, it’s about time that you do.

Gula Cakery is a cafe that sells a plethora of cakes and also hot meals around the Klang Valley in 6 different locations. The Gula Cakery chain all started with a simple dream from a simple woman named Arieni Adriena. Fortunately, I got an exclusive interview with her inspiring entrepreneurial journey.

Owning 6 different outlets in a span of 7 years, Arieni didn’t want her cafes to be known only to sell desserts: no, she wants it to be a perfect go-to place with your family and friends for a hearty meal as well as some incredible desserts. All of her hot meals menu over there are inspired by her own favourite meals elsewhere.

How It All Started

Fueled by her love of baking at the tender age of 4, Arieni learned how to bake cakes from both her grandmother and also her mother. Call it a hereditary hobby, if you may. At 18 years old, she got her own baking kit and things really got cooking. She would also sell her cakes at small bazaars during her university days.

Calling it her passion, she took classes at the Malaysian Institute of Baking (MIB) and also in Paris for a little while to properly learn the basics from A to Z. Ironically, while learning her professional baking classes at MIB, her classmates turned into some of her first students afterwards when she opened her own baking class. All she did was give them a taste of her unforgettable brownies in class and then they were hooked. Smooth marketing, we’d say.

Also having a bachelor’s degree in Early Childhood Education, she merged her two passions into one when she opened a class for baking at home for almost three years. At the age of 25, she got her first outlet at Kota Kemuning, Shah Alam with the name ‘Gula Cakery’. ‘Gula’ because basically, every dessert has sugar and ‘cakery’ because she has cakes!

Owning A Business Also Comes With Its Challenges

Some of the challenges that she faced were of course monetary, managing people and also maintaining the quality of her food. Without the help of a loan, she opened up her first outlet by using her own savings, a little help for her parents, and also the prize money she won in a business pitching competition from TERAJU in 2015 (sort of like Shark Tank).

Despite having 200 kinds of cake recipes and displaying 55 of them on a daily rotational basis, she desperately wanted to preserve the quality of her cakes so that the taste is always consistent and top tier as regular customers’ standards should always be guaranteed.

She also expressed that managing people is also quite a hard thing to do as every single person has a different way of thinking and you have to know their way of thinking, as the boss.

Apart from her stepping stone of winning half a million ringgit from the said competition to start her business, she’s actually so grateful for her outlets and the people under her.

For me, actually, I feel like handling around 150 people under me is the biggest achievement ever because I have the chance to guide, mould and hone their potential into the best versions of themselves. As a teacher, I really love the feeling of content and achievement that comes with it.

Additionally, for her future plans, her latest outlet is opening up in Melaka with the name of her second child and in the long run, she would love to have her outlets and bring her cakes all across Malaysia.

What Food Should You Try At Her Outlets

Apart from chit-chatting about her journey, I also got to taste a few of her recommended menus at the outlet.

This is one of her ultimate bestsellers. It’s basically a large pavlova with the legendary ‘melt in your mouth’ marshmallow taste of the meringue, accompanied by a generous amount of fruits and whipping cream. This is ideal for those sweet tooth lovers.

The tea is super fruity, refreshing and it has a lot of peach bits at the bottom! I am not gonna lie, from the food to drinks, my mouth went into a full-on chewing session.

For this main course, it is a fusion of the Malaysian and Italian dishes with sliced beef briskets. I actually love how the Masak Lemak sauce is made thick and creamy while the beef brisket’s smoky notes and tenderness pairs well with the sauce.

But a bit of warning, this dish is a bit tad spicy for those who can’t hold their spiciness level.

As this is one of her bestseller cake flavours, tasting it in the form of ice cream is definitely richer and creamier (it’s made with Callebaut chocolate and Nutella, hello premium). There are even some generous chunks of chocolate cakes in the ice cream as well for you to chew on.

For those entrepreneurs to be out there, Arieni says to dream without fear.

I love that quote as it generally means that whatever you wanna do, you have to start somewhere without feeling afraid that you’re gonna fail.

And additionally, I think having smaller but achievable goals definitely helps. One step at a time, as they say.

Also available online in the Klang Valley, you can get more details of Gula Cakery here.