One of the rare ketupat you can’t find in the Peninsula is the Borneo or Burasak ketupat. 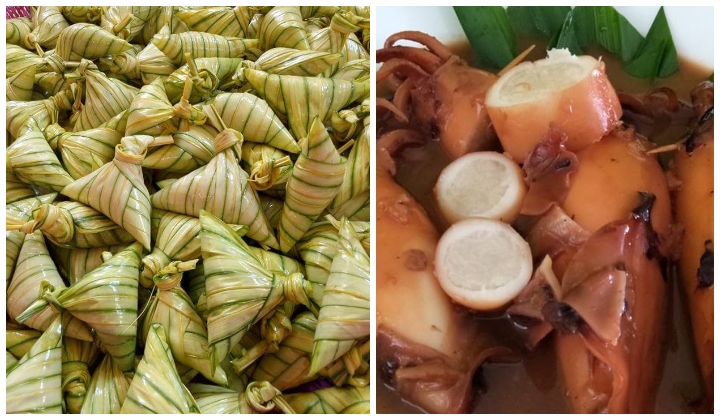 Quick. What’s the most common food you think of when it’s Raya?

For us, it’s KETUPAT!

This Malaysian Ketupat or ‘packed rice’ comes in different shapes and sizes. They are incredibly popular during Eid festivities, especially on Hari Raya Aidilfitri. Some can be eaten by themselves and some can be eaten with side dishes such as Kuah Kacang (Peanut Sauce), Rendang and many more.

Here are some of the common and also rare types of ketupat found here in Malaysia.

Let’s check them out.

This ketupat is diamond or square-shaped and its shell is made with woven coconut palm leaves. It is called bawang (onions) because the shape of the shell resembles an onion.

The way to prepare this ketupat is the same as others, which is to fill in rice and boil it in a pot. Only the shape is different from the rest of the ketupat. If you wanna learn how to weave this type of ketupat shell, take a look at this link below.

Now, this ketupat is popular in the East Coast states like Terengganu, Kelantan and Pahang. In the northern states, this type ketupat even has genders!

For the filling, this ketupat is a bit different as they use glutinous rice cooked with rich and creamy coconut milk. The shell is made from Palas leaves and the way to cook this ketupat is by either boiling it or steaming it.

Another fun fact about this Ketupat Palas is that it has a variety of flavours! The filling can be nuts, corn, meat floss, black glutinous rice and also plain. Even the plain one is delicious enough, others are simply a joy to explore!

This type of ketupat is called so because the filling is just regular rice, packed in a shell made from coconut leaves. They are also called ‘nasi impit‘. You can prepare this ketupat by steaming it inside a pot.

Nowadays, you can see this menu in instant square plastics, and it often comes along with Satay and Kuah Kacang. Besides that, it can also be eaten with Lodeh, Soto and also Rendang.

Also known as Burasak, this dish is rarely served in Penisular Malaysia because it is well known among the Bugis ethnic in Sabah. This is their traditional menu that they have with their Ayam Masak Merah, Ayam Masak Likku and Asam Pedas Ikan Parang.

Also called Buras, this dish is prepared by steaming the rice with coconut milk and wrapping it in Pisang Nipah leaves.

At one glance, you might mistake it for a Lepat Pisang but this one looks particularly wider and bigger than the banana flavoured kuih.

This dish is also called ‘Sotong Sumbat‘ or stuffed squid as the squids are stuffed with glutinous rice cooked with coconut milk.

This traditional dish is more popular in fishing villages on the East Coasts like Kelantan and Terengganu as their supply of squid during the squid season is abundant.

Waw, there are actually a lot of types of ketupat. And you thought there were only two, huh? Well, now you know.

Now go change the topic and share your precious findings with your aunties and uncles when they ask “When are you getting married” during this Raya.

All the best! Don’t say we didn’t try to help!