Why eat regular noodles when you can eat them while they levitate? 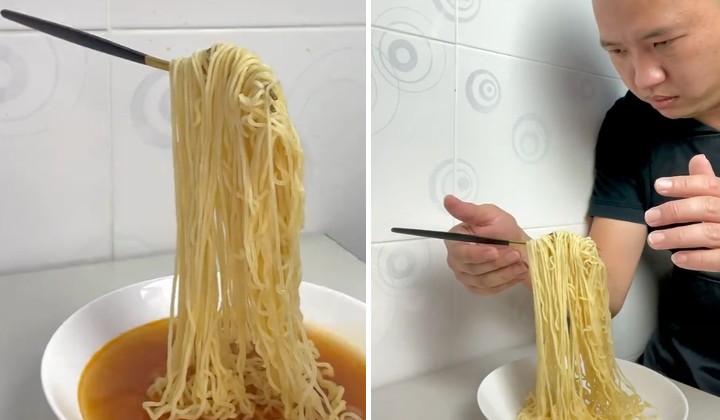 Have you ever heard of Mee Terbang? No, it doesn’t fly unfortunately but it does float!

The unique thing about this dish is that the noodles are maintained vertically upright as if hanging from the air by a pair of chopsticks or a fork. The kind of sorcery used to construct this magnificent dish requires a bit of creativity and A LOT of patience.

In case you didn’t know, these dishes are being served in various cafes in Sabah and Sarawak. You can try to find this in the peninsula but only in Sabah or Sarawakian restaurants if you’re lucky. But worry not, if you can’t get your hands on this mee, you can always make it yourself!

Thanks to @richard_is_cooking, a tutorial on how to do this dish is created for us creative netizens who wants to give this dish a try.

Garnering around 3.2M views and 256k likes, Richard’s video tutorial of the Maggi Terbang teaches how to make the noodles stand upright with a fork.

Starting off with boiling a packet of Maggi Kari noodles first for two minutes to soften it, the noodles are then put into cold water and drained completely.

Next, a bit of flour is added to the drained noodles and they are mixed evenly so that the noodles don’t stick to each other too much. The noodles are separated according to length to easen the wrapping process.

This is where the process gets a little tricky and challenging. In a medium heated pan of oil, the bottom part of the noodles are then dipped and fried in the oil. Careful not to dunk the whole noodles in the oil or it wouldn’t create the ‘hanging’ effect.

Using a soup ladle, the hot oil is poured continuously over the hanging noodles for a good 10 minutes so that the noodles can harden perfectly.

When it’s hard enough, you can transfer the noodles into a bowl and put in the soup afterwards. Then there you have it, ‘Maggi Terbang’.

The real question is, how do we even eat it?

Netizens are all in awe with Richard’s video and made a lot of jokes regarding it.

Most of them wondered how to actually eat this dish and for him to make another tutorial of eating the dish.

We bet it tastes quite crispy and bland but well, you can customize this dish with whatever you like. For example, in Sabah and Sarawak, this dish is cooked with springy mee and the gravy is done ‘Ladna style’ or ‘Hailam style’. It all depends on the creativity of the cook, really.

Goodluck trying out this recipe!