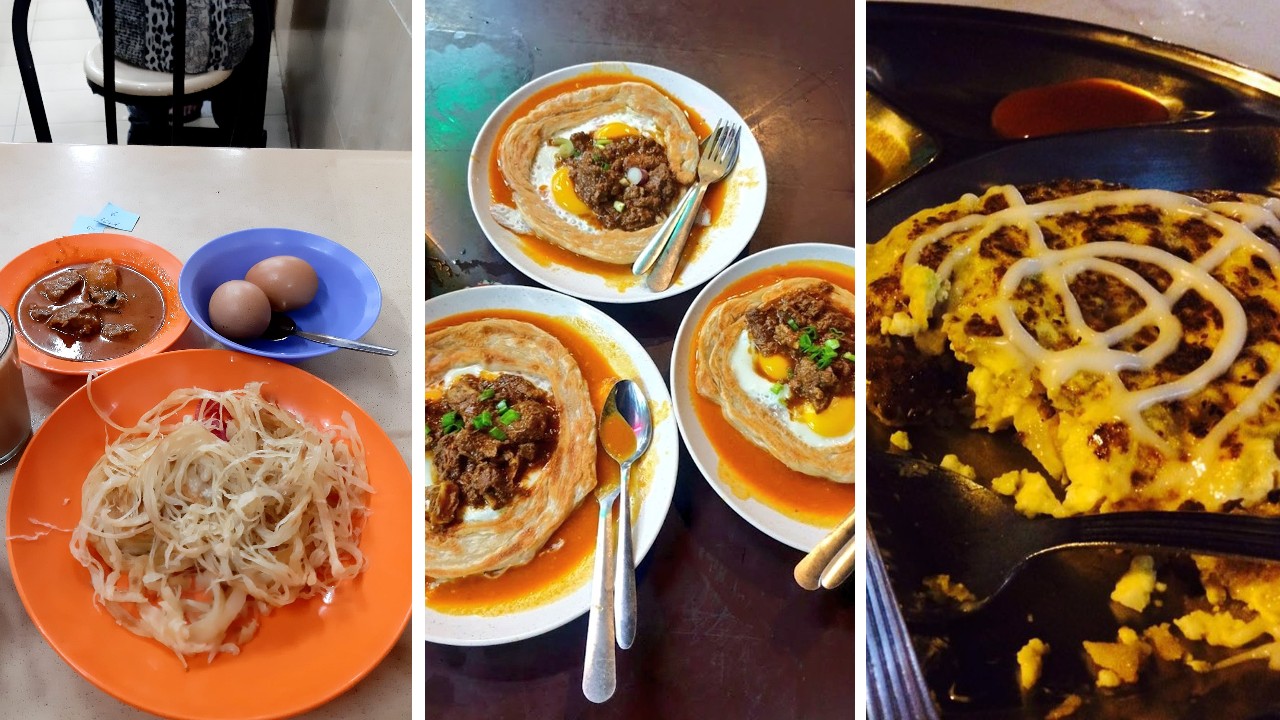 For those regular Mamak restaurant lovers, do you think you’ll know these types of Roti Canai? Everyone knows the basic roti canai like Roti Canai Kosong, Roti Telur, Roti Tisu and Roti Planta but did you know there are infinitely more ways to get creative with our roti? Here’s are some you may not have tried… or even heard about before!

Let’s put your Roti Canai knowledge to the test!

This roti is similar to Roti Telur but with a sunny side up egg plastered above the roti. It’s also called Roti Plaster. It’s a marvellous bonus if the egg yolk is runny.

This is a menu only certain Mamak stall knows. Kahwin means marriage so ideally, two types of roti are served together. Now isn’t that sweet? Usually, Roti Kahwin means one Roti Canai Kosong and one Roti Telur. It saves up the time to pronounce the quantity and name of the dishes, so yeah, just, “Anne, Roti Kahwin satu!”

However, the term Roti Kahwin is different for Sarawakians. In Sarawak, the name refers to toasted bread with regular kaya, pandan kaya and butter.

Banjir as in flood, a roti canai kosong is served with the gravy flooded on top of the roti, instead of on a separate plate. It’s going to get messy.

Now, this roti’s name is a play on words as ‘jantan’ here means ‘male’. It just basically means roti with two eggs and it is associated with men because of the ‘anatomy’. You do the math. It can be the typical Roti Telur with two eggs stuffed instead of one or it could also mean Roti Doll with two sunny side up eggs on top instead of one.

Roti Sardin is a regular Roti Canai Kosong stuffed with a sardine mixture with eggs and onions. It sorta looks like a murtabak but with sardine flavour.

This roti is stuffed with our Malaysian favourite chocolate malt powdered drink, Milo. The Milo powder is sprinkled on top of the stretched dough along with a drizzle of condensed milk before it is fried.

Mamak stall just took this to the next level. Mamak restaurants are known for their Maggi Goreng Mamak and Roti Canai. For this one, they combined the two fan’s favourites and the rest is history. Sort of like Murtabak Maggi, Roti Maggi is Maggi Goreng wrapped with Roti Canai Kosong.

No, it doesn’t have a King Cobra and it is safe for consumption. This is a regular roti canai kosong with any meat curry and pieces of beef/chicken on top. It is also served with a sunny side up egg on top and some versions can have veggies on the side. It is still a mystery how this Roti Cobra got its name, though.

Roti Pisang is Roti Canai Kosong stuffed with sliced bananas and a sprinkle of sugar.

As expected, this roti looks like a burrito. The dough is stretched long and an omelette followed by bits of seasoned chicken or beef is put on one side. Then, the filling is wrapped into a cylindrical shaped burrito. Lastly, before it is topped with dhal gravy and spicy sambal, the burrito is cut into bite-sized pieces. There’s also a rendition where cheese is added into the mix.

This roti canai is named as so because of the thread-looking roti. The making process of this roti is quite interesting as you can see how the cook sliced the flat dough into thin threads and rolled them into a round circle. After being fried, the roti is then puffed by two hands to create the perfect threads.

This roti is called so because it resembles a bird’s nest. The dough is stretched long and shaped into a circle with a blank spot in the middle on the flat pan. Then, two eggs are cracked into the spot together with whatever topping the stall decides to put. Some added a top of caramelised onions while some topped them with minced beef.

Another roti that no one knows the origin of, this roti is stuffed with a combination of eggs, cheese, margarine and condensed milk. It does sound delicious though.

The name is said to come from ‘Fuji Mountain‘ in Japanese. This roti is a version of Roti Pisang but with two scoops of ice cream added on top. The ice creams could be an imagery of the snow-capped peaks of Mount Fuji.

Roti Hawaii is a roti canai wrapped with minced chicken or beef, cheese, sausages, and pineapple (see the Hawaii-ness there?). Lastly, this roti is drizzled with mayonnaise.

Roti Beckham on the other hand is stuffed with tuna, eggs, cheese, and turkey slices. Also, lastly, this roti is topped with a mayonnaise dressing too to complete the awesomeness.

Hence, these are the types of roti canai that you might or might not have heard of. Do note that some of them might be quite rare or peculiar as they are only served in specific areas in Malaysia. You can try to find them to have a taste or just request your favourite roti canai guy to do some of these.

Roti Canai Makers In High Demand; Skilled Workers In This Field Are So Tough To Find