Malaysia has a lot of rare fruits that only some locals can recognize. 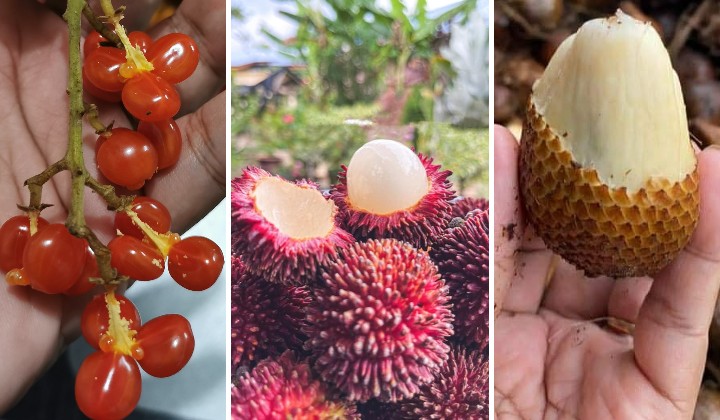 When we mention Malaysian tropical fruits, you must have these fruits in mind- Durian, Mangosteen, Rambutan, Mango and Cempedak, right? Well if we show you these fruits, would you recognize them?

Malaysia as a tropical country has a plethora of fruit species cultivated natively here. Some fruits may be popular in the modern world but some might only be familiar to the older generation. Don’t know these fruits? Try and ask your parents or even grandparents!

Salak is called Snake Fruit because of its exterior reddish-brown scaly skin that resembles a snake’s skin. The skin is said to be spiky and the fruit is estimated to be the size of a fig.

The yellowish-white pulp is shaped like large garlic cloves but with inedible brown seeds inside and is said to taste sweet, astringent and also sour, almost like a combination of pineapple and banana.

This fruit is native to Southeast Asian countries like Indonesia, Malaysia, Thailand and more. In Malaysia, this fruit was even featured on the Malaysian stamp under the rare fruit series issued on 27 February 1999.

Sentul is a fruit that’s considered rare in Malaysia nowadays and the younger generation might not recognize this fruit. You can find the Sentul tree in fruit orchards, village properties and in the woods too.

It looks like mangosteen inside but with a thick and soft velvety yellow exterior when ripe. The taste is said to be sourish sweet (some even said it could be sourish astringent) and the fruit skin can also be eaten raw or cooked in some dishes.

Some people might mistake this fruit to be Rambutan because of how similar they look. However, they are different fruits, though they do come from the same family!

The name Pulasan came from the Malay word ‘pulas‘ which means twist, the act of twisting the fruit with both hands in order to open it. With a thick, dark red leathery exterior that’s covered with soft and short spines, they are said to taste sweeter than the average rambutan or lychee.

Unlike the rambutan, the seeds can be eaten raw and taste somehow like almonds.

This fruit is grown as wild tree nuts around Malaysia and the oval fruits will turn red from green when ripe.

The seeds or nuts (which is brown) is the one that can be eaten in many ways such as in dishes or can even be made into chips.

The seeds, which are subtly astringent can be roasted and the brown exterior will come off revealing the white nut-like interior. The nuts are then pounded with a flat mortar to make them as flat as chips.

The Rambai fruit looks a bit like Langsat or Dokong but it can be differentiated between them by the way it grows on trees. They hang in long clusters of showy strands from older branches.

The white translucent flesh is said to taste sweet with a mildly acidic flavour. The skin can also be made into dishes like sambal, pickles and ulam.

This fruit is similar to Rambai but a bit smaller in size and the flesh is bright orange in colour.

The name of this fruit is associated with how easy it is to get the skin off the flesh – just flick (jentik in Malay) it. It has a sweet-sour taste and most often, it can just be sour if the skin is already cracked.

This rare fruit is native to Malaysia and can also be found in other Southeast Asian countries as well.

This flattened kidney-shaped fruit has a rough, yellowish-brown or green wrinkled exterior surface. The sour and mildly sweet fruit tastes somehow like an unripe apple and can be eaten with salt, rojak gravy or soy sauce sambal.

This fruit is also called the Otaheite Gooseberry which can be found native to Malaysia, some other Asian countries and also South American countries.

Their appearances are like tiny pumpkins, only whitish-green and they grow in dense bunches on tall trees. The fruits have a very sour, astringent and tart flavour and can be eaten with dippings like salt to lessen the sour taste.

This fruit is also called Sugar-apple, Custard Apple or Sweetsop and is in the same species as the soursop, only sweeter.

The surface of the fruit is rough, bumpy and segmented with the segments tending to separate when it’s ripe, exposing the interior. The white flesh has black seeds in each segment and tastes like sweet custard.

Often confused with Bachang, this Kuini or Kwini is basically in the same family as Mangoes. They look the same too.

What differentiates this fruit and mangoes are their size and smell. Kuini is smaller than mango and the smell is actually kinda pungent and strong. The fibrous juicy flesh tastes sourish and sometimes very sweet.

Similar shape to a Kerkup fruit, this fruit resembles cherries, red when ripe and tiny in size. They are also called Lovi-lovi or Tome-tome as they are also native to Indonesia and the Philippines too.

They are said to taste sour and acidic but crunchy. They can be used to make jams, pickles and jellies. The tip to eat this fruit raw is to roll them between your palms first before eating it to enhance the good taste.

They look like velvety grapes but taste sour like tamarind. They are also called tamarind plum or black velvet and are native to Malaysia and also Indonesia.

They have a hard and inedible black shell that protects the velvety brownish-orange flesh. They are said to taste sweeter, and dryer than tamarind.

They look exactly like Rokam, but they’re said to be different. Even the seeds are different, so are their scientific name.

Also called Perupuk, Kelelek and Pokok Johor by the locals, this tree is found native in the state of Terengganu and Johor. Looking like cherries but draping down like grapes, these tiny fruits can be eaten but this tree is mainly for ornamental purposes. It is said that the cherries have a combination of a sweet and astringent taste.

Who said Malaysia doesn’t have berries? This berry-like flowering plant is also called Rose Myrtle and is native to some places in Asia especially in Malaysia, Indonesia, Vietnam and Thailand.

This tree is usually made for ornamental purposes because of its beautiful pink flowers. The fruits will turn to dark purple when ripe and is usually eaten without the little heads. They are said to taste sweet and aromatic and can be made into jams, jellies, or even fruit wine in Vietnam.

Another one that looks exactly like grapes, but they’re just not. They’re also called Jambu Arang by the locals in Malaysia.

This fruit will turn a real dark shade of purple (or black) when it’s ripe and only then it will taste a bit sweeter (it’s astringent, generally). The fruits can also be made into drinks and can leave a black mark on your tongue when eaten. Be careful with your shirt, they can leave a red stain.

Some of these rare fruits are native, some were cultivated from other regions. While our parents or grandparents may have eaten these fruits before, they are becoming harder to find and fading into obscurity. How many of these do you know and have tried before?

Some of us might not even know these fruits existed, right? So next time you come across these fruits, have a try. You might just meet your favourite fruit ever.