From a cheap labourer’s food to one of the most expensive dishes now, Nasi Kandar is one of Malaysia’s food gem. 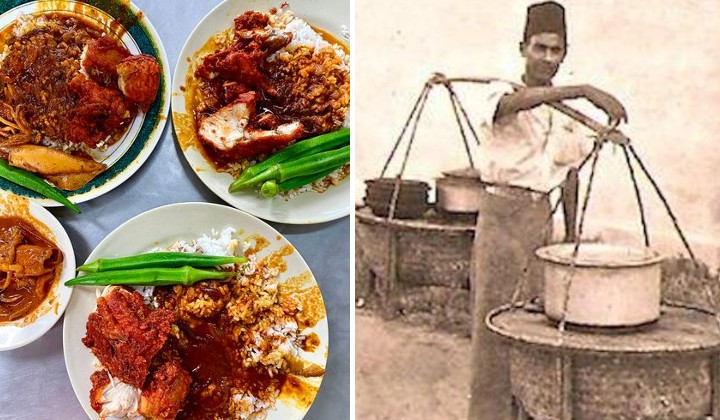 Are you a fan of Nasi Kandar? Although it is found in every state in Malaysia, they say that the best and original ones are from Penang.

Hailing from Indian Muslim traders from southern of India, this largely influenced traditional Indian cuisine is basically steamed rice with several Indian curries and side dishes.

The Story Behind It

The history of this dish is interesting as the word ‘kandar’ refers to the rice that rests (mengandar in Malay) on the shoulders of the vendors.

From the 19th century, Penang was an established international port at the northern strait of Malacca. There, India-Muslim (Mamak) immigrants roamed the port and streets selling their cuisine to labourers working there.

Also, since the 1930s, these Mamak hawkers would sell their food by walking from house to house balancing the baskets on seven feet long wooden sticks on their shoulders. At the end of each pole were pots containing plain rice on one end and curry dishes on the other.

The rice peddlers would usually come to the jetty, stayed in a spot with stools and chairs and served the labourers cheap, fast and heavy meals during breakfast to get them energized for the day.

The original menu of a Nasi Kandar during those times were only fried fish, okra and fish curry in a bed of rice all costing 5 cents a plate.

Fast forward to now, this humble dish is known to be a staple food in Malaysia served at Mamak stalls or restaurants.

Nasi Kandar evolved from being carried on poles to being sold on bikes and eventually being served in a physical store.

Perhaps after a tiring amount of effort carrying these dishes on poles and moving by foot, the sellers moved to use a transport to carry the dish around town. Previous owners of Hameediyah would cycle around Georgetown to sell Nasi Kandar as depicted by a mural featured in their chain of stores.

After some time, owners have obtained permits to operate in stalls and restaurants. Customers would have to go and find the dish in one place instead of the other way around, previously.

For the menu, you can choose plain rice or biryani rice to go with any protein like chicken, beef, fish, squid, prawn and veggies like okra and mixed cabbage. You can also pair it with a side of salted egg, boiled egg and papadam.

There would be long queues around famous Nasi Kandar restaurants during peak hours of the day like lunch and dinner. Some of the stalls open from the morning too as Nasi Kandar can also be a heavy breakfast meal like it used to be in the days.

Although it used to cost 5 cents per plate and served to labourers back in the days, now, it can be quite expensive for us Malaysians.

A plate of Nasi Kandar with rice and chicken can cost below RM10. But if you’re fancy and like a lot of side dishes like squid (the holy grail of expensive charges at Mamak restaurants), fish, okra, eggs, papadam and more, you gotta be prepared to spend around RM15-RM20 for a plate.

It could cost more, it could cost less, depending on which kind of restaurant and places you go to.

So there you have it, the history of Nasi Kandar. Next time you go to buy Nasi Kandar, ponder the fact that the rice that you’re eating used to be carried on a pole and only costs 5 cents!