Believe it or not, it is actually their bestseller dish. 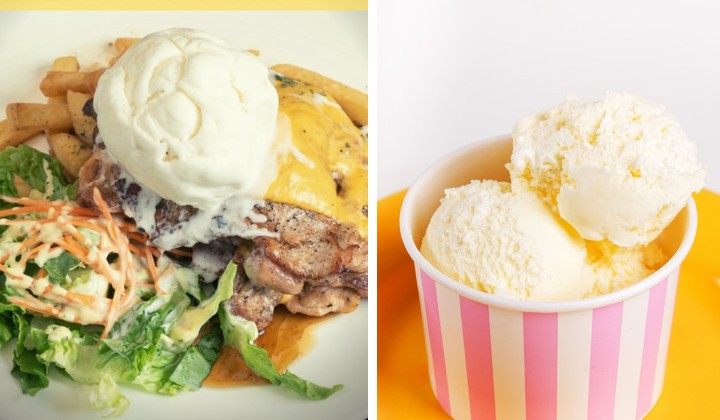 This may sound weird but hey, it’s the peculiar things that will blow your mind, right?

On the menu, there’s a dish called the Ice Cream Chicken Chop which is described as a grilled boneless chicken drumstick served with fries, lettuce, sliced cheese, mushroom sauce and vanilla ice cream.

A lot of the netizens were appalled by the combination of the two hot and cold elements in a dish.

“Err, do both of them really pair?”

“I think this is a ‘frugal plate’ package. They want you to eat the ice cream first. Then the chicken chop. So it’s just in one plate.”

However, some people actually liked it and do recommend it to the netizens.

“This is actually good, it’s my favourite at Sharing (the name of the place). At first, I was sceptical too.”

“Seriously it’s good? It doesn’t look like a good pair.”

“Seriously. It’s good. If I’m on a budget but I wanna go and eat western, I’ll take this one because it’s not like the others. Chicken chop is so mainstream.”

Weird or not, it is surely interesting to try for you daredevils out there.

Honestly, it looks very delicious to us. Curious? You can try it at their restaurant in Nilai, called Sharing.

This Kuching-Born Restaurant Is An 18-Year-Old Business

Their first restaurant called Sharing Planet started off in Stapok, Kuching in 2004. They have been operating there for 18 years and now has around 10 outlets.

They serve western cuisine in huge portions and at an affordable price.

When asked “What inspired the name of your restaurant?”, a representative from Sharing replied that ‘Sharing’ is basically their way of sharing good food together with everyone. Awh…

At first, we’re just looking for a place for people to do a sharing session for backpackers or any conferences.

So basically, we opened a place to let people share their experineces while having food and drinks in the sharing session.

Then, that’s when we decided to open up a restaurant of our own.

Currently, they have 9 outlets in Sarawak and one in Negeri Sembilan.

The first franchise in West Malaysia opened around August 2020 and is located near MK Curtain (HQ), in Nilai.

So currently we have a total of 10 outlets. Hopefully will open more at Semenanjung.

They classify their restaurants into three types.

Some of the restaurants already have their Halal certification like the one in Nilai and more. Others are pork, lard and alcohol free and are in the process of getting the halal certification.

They Serve Other Delicacies Too

This is also one of their bestsellers, apart from the famous Ice Cream Chicken Chop (they were the first to sell this dish in Kuching, FYI).

This deep-fried boneless chicken drumstick is served with fries and coral lettuce. It is topped with a piece of sliced cheese and drizzled heavily with thousand island sauce.

Hailing from Sarawak, it makes no sense if they don’t serve this in their outlet here in Nilai. This laksa is under the Rm10 lunch set deals from 11 am to 5 pm. They also have the Sarawak Laksa with Grill Chicken Breast with Egg Fried Rice for RM12.90 under the lunch set deals.

This dish is a bit pricey due to where the part of the meat came from.

This steak is served with mashed potato or wedges on the side along with coral lettuce and black pepper sauce.

For ocean dishes, their Fish and Chips and Garlic Butter Fish Fillet costs RM15.90 and RM18.90 respectively. The most expensive dish for the fish would be the Atlantic Salmon for RM37.90.

Mouth-watering aren’t they? Pay them a visit next time you’re heading to Nilai or Kuching.