The video gained traction for its peculiar combination of soda and spices. 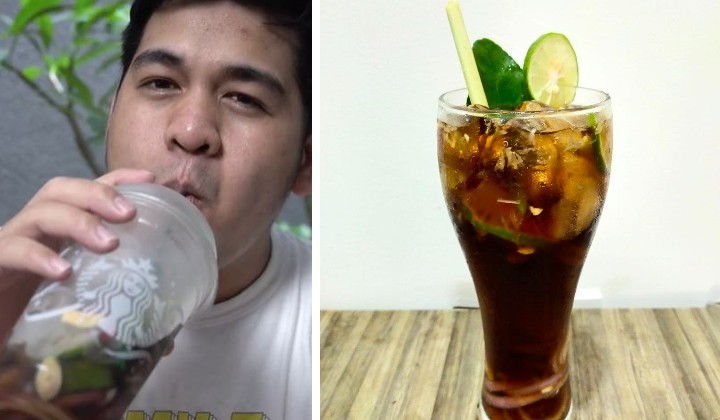 Whatever food trend that’s peculiar, they often tend to go viral. What’s weird in one culture might be normal in another.

Recently, a TikToker uploaded a video of him preparing a drink called ‘Tom Yam Coke Starbucks’. The drink is not from Starbucks, mind you, he just used that name because he’s using a Starbucks cup.

But the drink? It’s a drink of Tom Yum herbs with your ordinary coca-cola. Much like a fusion of America and Thailand. Sort of.

He has other viral food recipes but this one is truly peculiar. The video garnered 1.2M views, 90k likes and around 1.3k comments.

He gave a simple review saying that it was refreshing and shared the ingredients for his followers to try it out.

Netizens were shocked by the spices that he added to the cold drink. Most of them were also skeptical as they thought that it’s a very weird combination.

“What the- nevermind,” one commenter is definitely done with the weirdness of the drink.

“Americans watching this: Appalled and angry emojis” replied one person, as he jokes that this is a disgrace to the American’s Coca-Cola.

“Apologise now now now now,” commented another, as if this recipe is definitely wrong and unacceptable.

“Dude, this for real???,” asked one person, in disbelief.

What’s interesting about this is that the drink is seriously good (that’s what he said).

“You have to try it, it is seriously good.”

Is it though? Let’s find out.

The ingredients here are not much. Hey, if you have extras, you could whip up a Tom Yum meal afterwards. Without the coke, of course.

The method is fairly easy. You chop these herbs up and put them in a cup or a glass. Then pour in the coke. Tada! One Tom Yum Coke, ready to be served. Bottoms up.

This drink doesn’t totally taste like Tom Yum but it’s kinda herbal-like. It sort of feels like a detox drink but with coke.

Imagine lemon mint soda, but with a sharper and warmer taste. It is indeed refreshing, though. The lime goes well with the coke. Citrusy and fizzy.

You can taste the flavour of the herbs strongly, especially the onions, garlic and chilli. It has just a little hint of spiciness in every sip.

However, the sharpness of the onions just drowns the other herbs. I should’ve reduced the slices as I’ve put three big chunks. Well, you know what they say, everything should be in moderation.

In some other recipes, I saw that they put Kaffir Lime Leaves, so I put a little bit of that too. Now that’s real Tom Yum. One leaf is enough, and it should be shredded if you want the taste to truly be present.

Although it is indeed refreshing, I still can’t finish the drink.

I thought I could like keep it in the fridge and finish it later but that was the wrong decision to make. It got worse. It got bitter and a whole lot more herbal. Thanks to the kaffir lime leaves and a whole lotta lime.

If you wanna try this drink, I suggest you put the ingredients in moderation.

But if you like a bit of freshness and warmth in your drink, you should definitely try this.

I did not regret trying this. Kinda love the fusion of flavour here. Just should’ve made it in a smaller portion.

Go try it out and tell us what you think.