The tip for this 5-minute instant noodles hack is really just peanut butter. 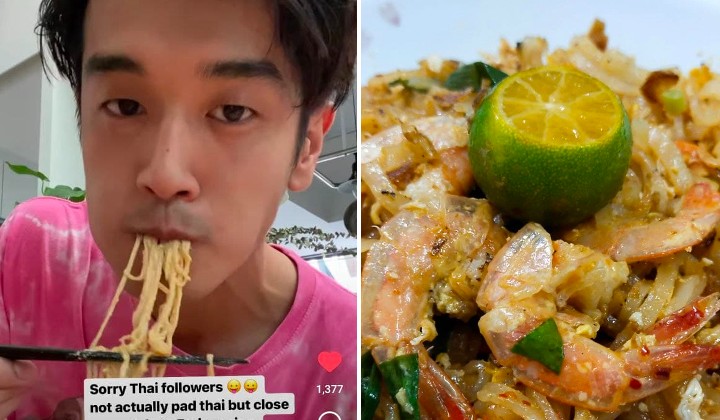 It is a popular dish in Thailand cuisine along with Tom Yum, Pad Kra Prao, and Som Tam. Most Thai food combines the flavor of sweetness, savouriness, sourness, and spiciness.

He made the video to promote his song called “Simple” in which the Pad Thai hack was fairly easy to make.

The teenage heartthrob made a simple tutorial by using instant noodles as a substitute for flat rice noodles.

However, as effortless as it is, does it work though? Is it cap or no cap?

I personally tried his simple hack, and here’s how it goes.

Here’s a step-by-step process to accompany the short 30-second video (link above) I made on the recipe.

2. While boiling the water in a pot, grab a spoonful of peanut butter and mix it evenly with the noodle’s seasoning in a bowl.

3. When it’s ready, cook the noodles for about 3 minutes and then add in the egg after the noodle is soft. You can stir the egg so that the egg yolk will be evenly distributed among the noodles.

4. Drain the cooked noodles, and mix them with the peanut seasoning mixture earlier.

5. Add in the bean sprouts, chopped spring onions, the chilies, and mix them well.

6. Finally, squeeze the lime on top of the dish to give it a tang of sourness to complete the dish.

7. Hey! Don’t forget to take pictures first! You know, one for the gram. 😉 Our followers have to know that we can cook now, don’t we? Sorry, I’m just obnoxious, that’s all.

And cut! We’re done! Roll down the curtains! *cue the credit roll*

Now that the 5-minute hack is done, and yes it really took around that little time, except for the photoshoot part of course.

It’s not that awesome, BUT with certain additions, it might actually work.

Great recipe, I applaud the simple steps and how quickly it took to prepare it.

However, it doesn’t taste as mind-blowing as I’d hoped it would be.

There’s just something missing, which may be the crunchiness of the peanuts. You can give it a try with chunky peanut butter if you’d like.

Or it might be the spiciness of the normal seasoning. Don’t get me wrong, an occasional bite on the chilies does sting, but it’s just not incorporated well in the dish.

A dash of chili powder or flakes might save the dish. Or maybe paprika. Hey, your dish, your choice, really. Freedom to choose and all sorts.

The bean sprouts are very raw and fresh, yes, but I’d recommend you to cook it by boiling it a bit with the noodles, not too long though. We just wanna get the right amount of vegetable crunch.

But hey, everyone has different taste buds, right? So if you’re keen on non-spicy but savory and sweet stuff, then this is perfect for you.

Other than some modifications, I’d say that this dish is definitely worth a try.

Do try it out and give us a heads up on your reaction to it. Is it really worth it?

Why Is This Enoki Butter Mushroom Recipe Going Viral? We Try It Out [Review]