From ‘Corpse Cake’ kuih to ‘Princess Bathing’ kuih, Malaysians think of everything. 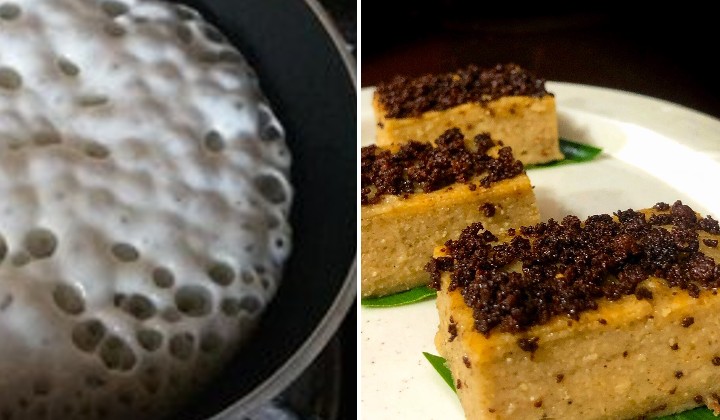 Malaysians are no doubt, very unique when it comes to naming certain stuff, such as places, islands, and food.

Did you know that we have roads and places with names like Jalan Microwave, Desa Temu Jodoh, Pekan Lanchau and Kampung Permatang Kerat Telunjuk?

See? We have quite a creative imagination. But the best part of it all is the story behind them. Interesting and fills in your curiosity. We just love our Malaysian folklore, don’t we?

However, let’s talk about our ‘Kuih Muih’. The word ‘Kuih’ or ‘Kue’ is originally from the Chinese word ‘kueh’ and are local bite-sized snacks or desserts known to be served for breakfast, tea time, and after some big meals.

You might know a lot of traditional kuihs but there are still some delights you never knew existed.

Well, the direct translation doesn’t make it better does it?

This particular snack is native to the state of Kelantan where it is named after the shape and the purpose of the Kuih, not the taste, obviously. It’s used to be served as a royal sweet dish to the Kelantan Sultanate.

It is whitish, round (depends on the mood of the baker, it can as well be in whatever shape they want) and in clumps. The appearance doesn’t exactly resemble a duck’s dropping but there are some features here and there.

It is mainly called a ‘by-product’ because of the key ingredient egg whites used in this kuih.

This particular Kuih comes along with other types of Kuih called Kuih Jala Emas, Kuih Bunga Tanjung, and Kuih Pauh Dilayang which are made from egg yolks. Therefore, kuih Tahi Itik is produced with the waste production (the castaway egg whites) of the said Kuihs.

This Kuih is made from egg whites, sugar, flour, pandan leaves, and some cloves. They are sweet and soft and you can find them in markets on the East Coast of Malaysia.

The name of this Kuih is actually Kuih Koleh Kacang (Green Bean Pudding) made with green bean flour, sugar, palm sugar, pandan leaves, coconut milk, and salt. This is the base of the Kuih.

The actual name ‘Tahi Minyak’ only refers to the topping or garnish of the Koleh Kacang. It is made with coconut milk cooked with salt and the making of it is how the garnish got its name.

Usually, when coconut milk is cooked on medium heat with salt, it will harden and become brown clumps in a pool of coconut oil that can be used later as cooking oil. Pandan leaves can also be added in the process to enhance their sweet flavor.

The residue of the oil after it is segregated is what we call the Tahi Minyak. It’s quite sweet and crunchy, most probably why it is made as a garnish.

Now this Kuih is quite shady, don’t you think?

We bet you guys are curious about how a princess takes a bath. Well, based on this Kuih, gracefully.

The name of this dish is a metaphor for its method of preparation. Similar to how a princess would gracefully take a bath, the maker would have to be handling them delicately as well.

The “princess” dough is made of glutinous rice flour and pandan water while the “bath” is made from shredded coconut, palm sugar, pandan water, as well as sugar.

The dough should be softly curved in the middle and cooked gently in simmering water. After it’s done, it should be bathed carefully in the coconut mixture as a final step. Carefully and gracefully like a princess.

Rest assured, no endangered hippos were harmed in the making of this process.

The Hippo’s Bath is a similar dish of glutinous stuffed balls ‘bathing’ in syrup but shaped fatter and require a less delicate process than the Princess’s Bath.

Have you ever seen hippos take a bath? We’re sure most of us haven’t but for those of you who don’t know, Hippos soak themselves in mud or water to keep their body cool. Now imagine that picture. Next, take a look at this picture.

Identical, but not quite. This literal imagination of our people is what got this Kuih its name. The so-called “hippos” are made from a paste consisting of glutinous rice flour, pandan water, and food colorings. Inside the “hippos”, are a surprise of sweet coconut fillings.

The “hippos” are submerged in the so-called “mud” which is made from coconut milk, rice flour, salt, and of course, our favorite leaves, pandan again. A quintessential ingredient in a typical Malaysian kitchen.

5. Kuih Serabai (The Shabby One)

Believe it or not, this Kuih is also called Kuih Mayat (The Corpse Cake).

Now, this is a Kuih native to the Northern part of Malaysia. The shape is simple. A circle. Not much. Not really a hassle to make. Just well… shabby.

This kuih is said to be prepared during funerals back in the day. As family members were mourning their deceased ones, their appearances were shabby and the food that they served were also plain and unimpressive. No need for fancy dishes. It’s a funeral. Not a celebration.

This dish comes with a custard soup (pengat) made of bananas or durian, palm sugar, coconut milk, and pandan leaves.

The dish itself is made of rice flour, leftover rice, sugar, coconut milk, and yeast. It is made into a tiny pancake and served with the side dip. Simple yet delicious to eat.

Despite all the weird names and plain appearances, all these kuihs are still delicious and eaten regularly, which proves that Malaysians will eat anything as long as it tastes good.