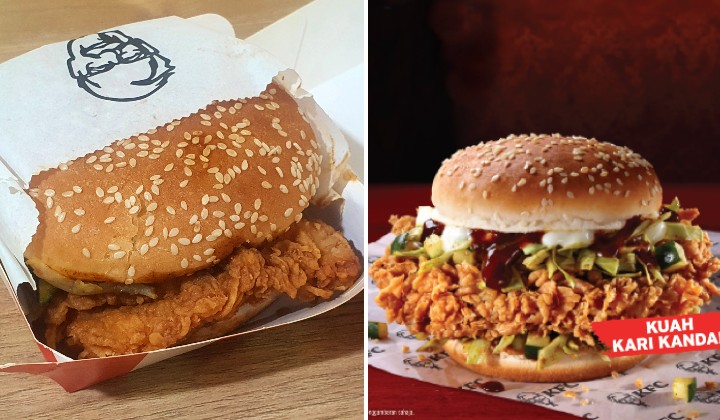 The new Burger P. Ramlee from KFC is a limited-time tribute to the late Malaysian legend Tan Sri P. Ramlee.

As a true blue Malaysian, Nasi Kandar was one of his favourite foods, a little fact that had made its way into his last film, Laksamana Do Re Mi.

I will, however, judge the taste of the burger.

The burger has a viscous pour of sauce, the Kuah Kari Kandar, plus a generous handful of cubed cucumbers and cabbages. The vegetables are a welcome sight in a sea of sauce.

The sauce isn’t particularly spicy, though it definitely is peppery and exciting. It’s somewhat similar to a lighter black pepper sauce with way more aromatic notes.

The Zinger patty still stays crispy despite the sauce, pairing well with the soft bun and sauce.

The burger has an interesting taste, but definitely don’t expect it to be particularly authentic as “nasi kandar”.

Still, it does invoke a familiar Nasi Kandar taste, likely due to their Kuah Kari Kandar that’s made with turmeric, lemongrass, cumin, and curry leaves.

The fragrance of the local herbs plays well with the crispy Zinger fillet, but the sauce can be overwhelming due to its strong taste. The burger I got was well-portioned with just enough sauce for the Zinger patty, but not too much to the point of jelak.

I was actually not expecting much from this weird flavour combo, but consider me pleasantly surprised that the burger turned out quite delicious with the interesting twist.

You can get the Burger P. Ramlee as an ala carte, combo, set lagenda, or kombo ikon. Additionally, you can order through the KFC App with the promo code PRAMLEE for 10% off.