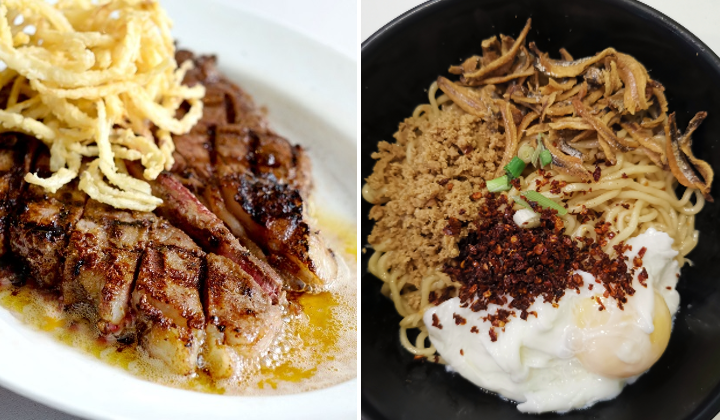 After almost two years of only being able to enjoy our favourite foods delivered and taken-away, the time for dine-in food is finally here!

Because as much as we tried to make the best of our time in lockdown by learning how to cook, there are some things that are simply so much better when you dine-in at a restaurant.

Here’s a short list in case you’re feeling decision fatigue about what to eat now that you can go anywhere again.

Yes, some people argue that you can have banana leaf to-go. All it comes with is like 10 plastic bags, not enough curry, and either too much or too little sides to go with it.

Anything that needs careful temperature control cannot survive being put in a take-away box and delivery. Food in a take-away box traps heat in the box but also loses heat as a whole, which can lead to food overcooking while also becoming cold.

A great steak requires careful control and application of heat, especially if you’re ordering it rare or medium rare. Which is why steak should be served directly from grill to plate, so hungry patrons can bite into steak the way it’s meat to be: juicy, sizzling hot, and perfect.

Like steaks, certain seafood need to be cooked exactly right and toe a fine line between undercooked and overcooked. For amateur cooks, seafood can be quite daunting!

For fans of seafood, consider ordering the more difficult but so satisfying kinds such as steamed fish, crabs, scallops, lobster, or mussels, now that you can dine-in and have a professional chef cook for you.

The point of buffets is that you can eat whatever you want, whenever it takes your fancy. You get to feel like a king as you meander to the glorious food spread knowing you can eat it all, or go for seconds, or thirds, or fourths.

The good news is that while buffet restaurants previously had their selections laid out in an open area, certain restaurants are now turning the buffet experience into something more like an “unlimited menu”. You won’t get to walk around and visually see what you want, but you can order as many portions as many times you want from a menu.

It’s much safer, and you get impeccable service!

Look, the whole appeal of Korean BBQ is that other people do the hard parts of cooking for you. By this I mean the preparing of the meats and side dishes, checking and changing the grills, stoking the fire, refilling the vegetables, and cleaning up the dishes afterwards. If you end up doing all this with a “KBBQ take-away”, then that’s just called cooking at home.

While you technically “cook the meat yourself”, all you really do at a Korean BBQ is sit down, put meat slabs on the grill, and flip it around a few times. All the hard parts? Let the restaurant deal with it.

Noodles are my life. There’s just something about slurpy goodness that is irresistable. Yet while soup noodles fare better in delivery, dry noodles with sauce generally do not hold on very well, such as chili pan mee or dry wanton mee.

The first problem is that the noodle tend to solidify very fast as it cools down. By the time the noodles reach you after delivery, it’s usually lost most of its springiness and will require effort to untangle the noodle brick without breaking the noodles.

The second problem is that if the noodles are not already stirred well, only the bottom half of the noodle absorbs the sauce while the top remains plain. Once again, when noodles cool down, they also lose some absorbancy of the sauce.

Dry saucy noodles need to be eaten freshly made, just like most of the other dishes listed here. Still, this is merely a short basic list, and there’s certainly more kinds of food that simply doesn’t fare well after take-away or delivery.

This one is a bit of a given, really. While fast food outlets such as KFC seem to have miraculously perfected fried chicken that still stays crunchy when it’s not even hot anymore, most other fried foods turn soggy after being delivered due to condensation in the take-away box.

Whether that may be fried fish, fried mushrooms, or even regular fries, it’s all much better eaten hot.

And of course, sushi! If you’re getting raw fish sushi such as salmon and tuna, having it sit around warm spells disaster, for both your stomach and your tastebuds.

I strongly believe temperature is a taste on its own. Don’t believe me? Try delicately made sushi with cold fish and warm rice, then try the same sushi that’s been sitting out for half an hour and is at a mushy room temperature.

Yeah, I thought so.

9. Anything with melty cheese

Sure it’ll still taste pretty good, but if you’re someone who’s keen on texture, cheese in your delivery is no-go. But now with dine-in, you can finally satisfy your melty-cheese craving.

“Don’t List If It’s Unavailable!” Customer Got Sesame Balls Instead Of Potato Wedges

Special Channel Set Up To Take All Food Delivery Complaints