If you recognize this, you know you’re getting old – this simple treat was a big favourite among Malaysian kids in the olden days. 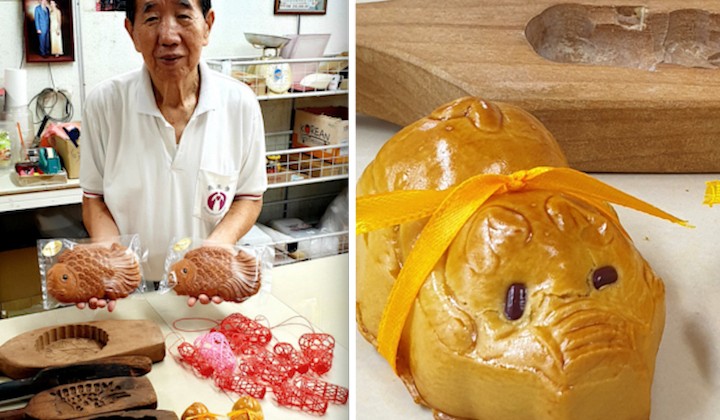 Moon cakes are so typical these days that we seem to take them for granted. We always present and receive moon cakes as gifts, which come in ever fancier packaging.

And so are the ingredients, from durian to chocolate to caviar and even cannabis compounds (this one is not sold in Malaysia).

Moon cakes are even made for dogs. In Hong Kong, at a famous five-star hotel where dogs can check in with their human owner, these moon cakes are made with horsemeat for HK$48 (RM26) each.

But back in the olden days, not everyone could afford moon cakes despite their importance to the Mid-Autumn celebration.

Then, in the 60s, pastry makers came up with the idea to use leftover doughs from moon cakes.

They made plain biscuits that everyone could afford so that no one would be left out from the important festival.

And so, the cute piggy biscuits –  adorably ‘caged’ in baskets were born.

It is believed that the trend started in Guangdong and Hong Kong. From there, it spread to the Chinese communities in Malaysia and Singapore.

But why pigs in baskets?

No one knows for sure, but it’s likely because of the auspicious Chinese saying – water entering the pig cage – which means getting large amounts of wealth.

Besides being a prized source of meat through the ages, pigs symbolize good fortune in Chinese culture – the word for “home” in Chinese consists of a roof with a pig beneath.

Master baker Ng Lian Pin from Ipoh has been making the beloved piggy biscuits for as long as he can remember.

The octogenarian – who has been making traditional Chinese pastries for 60 years, continues to make the piggy biscuits for nostalgic reasons.

“It’s not a lot of work, but then you have other pastries to make especially moon cakes, which means you don’t have the time.

“Which is why most piggy biscuits that are sold nowadays are just plain shaped,” said Ng.

These days, the piggies are sold for about RM1 each and he said the baskets, made of plastics, cost more than the piggies themselves.

But he doesn’t mind as it is part of the heritage, and the piggy biscuits are a reminder that one can be happy with little.

“I hope the tradition stays alive. The moment we forget who we are, we lose ourselves,” says Ng.

This year (2021) the Mid-Autumn Festival will be celebrated on 21 September (Tuesday).

Why Do Eggs ‘Stand Up’ During Li Chun Festival?

Did Mooncakes Really Play A Part In The Rebellious Uprising Against The Yuan Dynasty In China?