Most frozen foods struggle to maintain flavour, and end up tasting like cardboard. 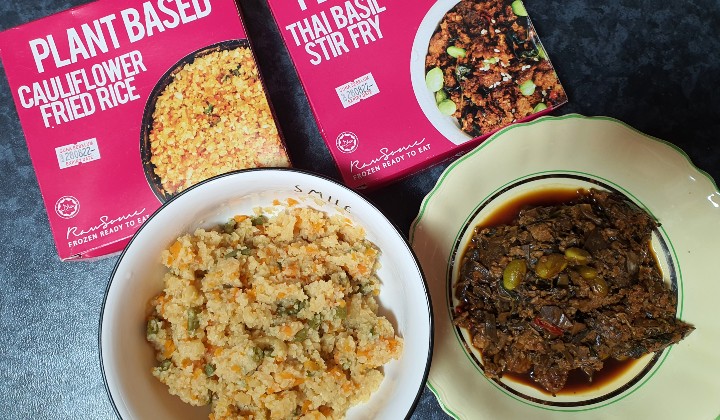 There’s a growing trend of veganism and plant-based meals in Malaysia for lifestyle choices, and local brands are making it easier than ever to enjoy delicious Asian cuisine turned vegan!

One such local brand is Rawsome, which has actually been around for a while. I got to try a bunch of their frozen ready-to-eat meals, so here’s an honest review of what I think about it.

The bright pink packaging is pretty awesome. Inside, the food are packaged in foil baggies. The kind of frozen meals I’m used to often come in thin black plastic boxes that you microwave and eat out of, so this is an interesting change.

There are two reheating options: microwave or simmering. If you’re using the microwave, you’re supposed to cut open the foil and pour the contents out into a microwave-safe bowl. If you’re simmering it, put the foil packets into a pot of water and let it simmer until heated up.

As for the portion size, most of the single dishes were separated into two foil packets. I assume the smaller packets mean it reheats faster and more evenly, but it also means that if you’re a tiny eater, or if you only need a small side to complement your main, you could make one portion last twice.

If the frozen meal is the only thing you’re eating, it may be enough for one, but you might want to add on other things if you’re in a hungry mood.

Taste-wise, everything was really spot on. Vegetables actually tasted like vegetables, even after being cooked and frozen and heated again, such as the cauliflower rice and the bits of green beans.

The Nasi Lemak box is actually a good “taster” for most of their other foods: it features the cauliflower rice, rendang tempeh, and curry stew– all of which you can buy separately as a side on its own.

Individually, each part tasted delightful. The rendang, curry, and sambal were quite spicy, but the flavours tasted as it should.

My favourite is perhaps the Thai Basil Stir-Fry. Its texture held up well with the somewhat spicy and savoury sauce, and you would not know it was made with soy-based meat and not real minced meat.

The food itself was extremely decent. Whereas most frozen foods suffer from tasting like cardboard, Rawsome’s frozen meals all tasted the way it should. Nasi lemak tastes like nasi lemak. Rendang tastes like rendang. (Although the Korean Stew, while still delicious, didn’t particularly taste like anything particularly Korean to me.)

The one thing Rawsome’s frozen meals suffer from, just like all frozen meals, is the texture– or the lack thereof. Because frozen meals are all pre-cooked and technically ready to eat straight from the bag, reheating a frozen meal in a microwave often results in a soggy limp mess.

However, using the simmering method as instructed on their packaging actually yielded much better results and made the food much more palatable than the microwave method.

Soy-based products– such as the Thai Basil Stir-Fry– held up better because it didn’t turn to mush. However, the Cauliflower Rice was rather wet and mushy even with the simmering method, although I think that’s simply a side-effect of the freezing method on vegetables.

For just RM9.90-RM14.90 per box, I’d definitely say that Rawsome’s frozen meals are something convenient to have in the freezer for those days when the most you can do is boil a pot of water.

Certainly better than instant noodles, but of course nothing beats a fresh home-cooked meal.

IKEA Malaysia Releases Plant-Based Menu For The Month Of October!

[Review] How Does The New McD Rockin’ BBQ Burger Roll?