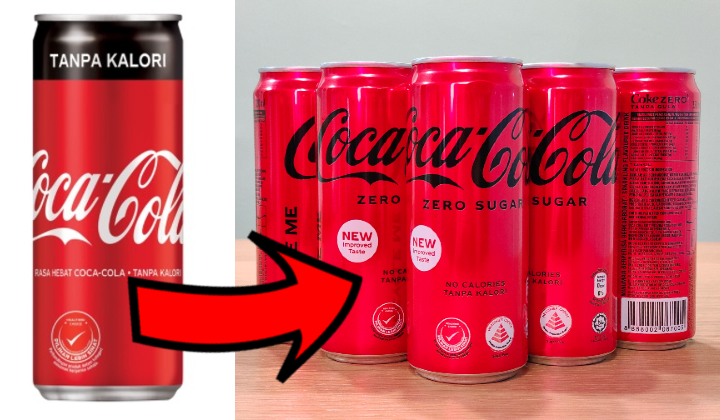 Listen up, Coke drinkers: Coca-Cola Tanpa Kalori will be no more in Malaysia. (The Coke Klasik drinkers are now probably looking at each other smugly.)

But Malaysians who are watching their diet or concerned about their health need not worry– you will still have a healthier alternative to Coca-Cola Klasik! Just because Coca-Cola Tanpa Kalori is being retired doesn’t mean that you will no longer get to taste the bubbly joy of Coke.

Tanpa Kalori will be replaced by Zero Sugar

There will be a new alternative to Coca-Cola Tanpa Kalori, which is the new Coca-Cola Zero Sugar. It comes with a brand new simplified packaging as well (which will be rolled out to other drinks eventually).

It boasts a taste “as close to Coca-Cola Klasik as possible” but with zero sugar and zero calories.

The new Zero Sugar is aimed at the existing Coca-Colat Tanpa Kalori fan base, but also geared to consumers of the Coca-Cola Klasik, who may never have truly considered anything else but the original.

The brand is asking consumers to give it a shot, whether you’re staunchly team Klasik-is-best or team healthier-is-better. In fact, they’re literally asking people “What if the new Coke Zero Sugar is the ‘Best Coke Ever’?”

Why not try a sip and see if the Zero Sugar truly is the ‘Best Coke Ever’? Can it dethrone the Klasik? Give it a try and then let Coca-Cola know if you think it truly is the best.

The Coca-Cola Zero Sugar is now available wherever Coca-Cola is sold.