The “Mooncake Uprising” legend tells a tale of hidden messages to rebel in the innocent-looking sweet treat. 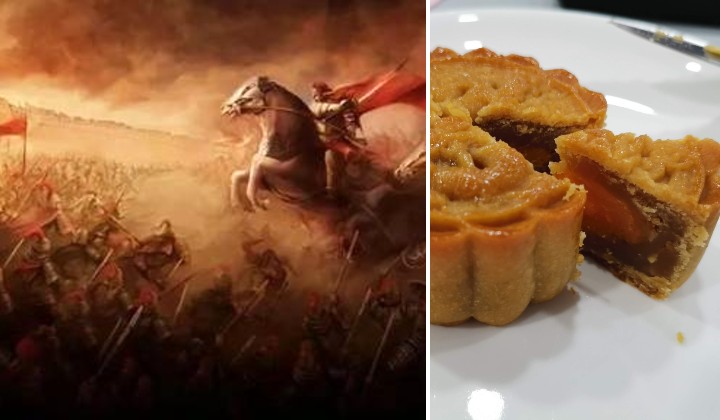 Mooncakes have a long history, dating back thousands of years in China. In fact, a surviving story about the sweet treat claims that it even helped rebels dismantle the Yuan Dynasty, called the “Mooncake Uprising”.

The Yuan Dynasty (1271 – 1368) was the first time China was ruled by the minority Mongols. According to history, this was a tough time for the people as the this Mongol government tried expanding very quickly, engaging in conflict with other groups on the borders, resulting in many skirmishes and wars.

After a few decades, there was rampant corruption in the governing rule, with Mongol royalty seizing land for private use and forcing high rates of taxation. This, coupled with weakening national influence and many years of famine, plague, and disaster resulted in resentment in the people, particularly the peasant workers whose lives were burdensome.

Legend has it that the Mongol rule was so oppressive and scared of rebellion, they banished anything that can be used as a weapon. Only one blunt kitchen knife could be shared by 10 families. Soldiers were also stationed in villages to quell any gatherings and monitor correspondence to avoid rebellion.

To secretly send messages, the villagers baked strips of paper with messages into mooncakes, using the culture of gift-giving during the Mid-Autumn Festival to spread the word of the rebellion. They would send the mooncakes to each other, and only upon breaking open the mooncake would rebels know the plan to attack on “the fifteenth of the eight month”, also the day of the Mid-Autumn Festival according to the lunar calendar.

As a result, the Mongol empire was taken by surprise when the rebellion did happen, and fell shortly after that– thanks to the messages hidden in mooncakes.

What Does History Say?

While the legend makes for a great story to tell as people eat mooncakes, historical events most likely didn’t pan out that way.

Firstly, history tells us that the people were plagued by famine and hardships. Most peasants would likely have barely enough rice to eat, let alone the rich and luxurious mooncake. It is unlikely that most families could bake enough mooncake to use for sending messages.

Secondly, literacy at that time was for the rich and influential men. Peasants were labourers who worked on the farms and trade. Women were not allowed to learn literacy at all. Hence, while the idea of peasants exchanging written messages in general is quite novel, it likely didn’t happen.

Weaponry from spears to pikes were used by both sides– there would have been no way to enforce the ban on kitchen knives. (In fact, a rebel general would write books on military strategy using a fire lance, which is a polearm with a gunpowder-filled pyrotechnic device on the tip.)

The rebel leader was Zhu Yuangzhang, a peasant farmer who lost his family to the many famines, joined a monastry where he learned to read and write at the age of 24, and became a military leader of the rebel force after his monastry was destroyed by the army.

It wasn’t a surprise peasant rebellion with messages in mooncakes that led his rebel forces to victory. It took 15 years (1352-1367) of resistance before the Yuan government fell.

History doesn’t take note of the mooncake legend until much later as well. It is first mentioned in the late Qing dynasty in the 1900s– making it, yes, likely a marketing ploy to sell more mooncakes.

However, it really is a fun story to tell when you’re eating mooncakes, as long as you make sure to share the real history with it as well.

How To Choose The Right Kind Of Mooncake To Gift Anyone