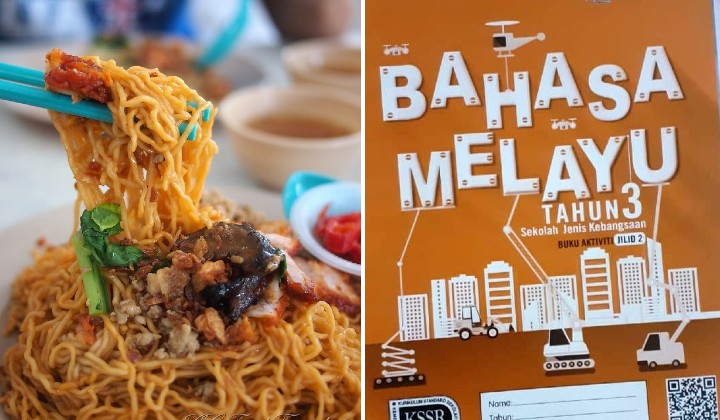 Facebook user Amelia Lim was outraged that a Standard 3 workbook for the Malay language claimed that Sarawakian kolo mee and kampua mee are the same.

In a Facebook post, she shared pictures of the workbook, written and published by the Education Ministry, which tests comprehension of the Malay language. A paragraph introducing kolo mee describes it as “a food popular in Sarawak”.

It goes on to then say that another name for kolo mee is kampua mee or dry mee.

Sarawakian natives were quick to deny that the two noodle dishes are the same, calling such an example disappointing and ignorant of Sarawakian culture.

Many Sarawakians came out to say that the noodles are very different in texture, toppings, and taste.

On the surface, both noodles seem extremely similar, as they are dry noodles tossed in sauce and topped with charsiew.

However, the two originated differently. As such, the texture of the noodles and taste of the sauce are different as well.

Kolo Mee is a dry-ish noodle dish that originated from Kuching. The dry noodles come with a generous amount of sauce, which is why it’s more commonly served in a shallow bowl instead of a plate. Kolo mee also uses crinkly, springy egg noodles.

The sauce often takes on its signature red hue because it is made with pork lard that comes from charsiew. The pork lard is a key part of the sauce, which also features shallot oil, light soy sauce, and vinegar. It is light in colour because dark soy sauce is not used.

It is commonly topped with a spoonful of minced pork, char siew, spring onions, deep-fried shallots, and seasoned cut chilies. The main flavours and taste profile of the noodle dish comes from the sauce and the many variety of toppings used, even seafood!

Kampua Mee is a dry noodle dish with foochow origins, commonly attributed to have originated in the Sibu and Sitiawan areas. The dish is even lighter and drier than kolo mee.

The noodles used are straight fresh egg noodles, which function as the star of the dish. Toppings are relatively simple and plain, often only with sliced strips of charsiew and wanton. The dish can also be topped with chili sauce.

Since both dishes use pork lard as a base, when they are modified to be suitable for halal patrons, the pork lard and pork-based toppings are commonly substituted for beef or chicken. The two dishes then become relatively similar for a halal audience.

Kolo mee is also more well-known than kampua mee to those in Peninsular Malaysia, and has probably gone through mild tweaks to make it suit West Malaysian tastes. As a result, the halal versions of kolo mee and kampua mee that we can easily get in West Malaysia may not be the truest sampling of delicious Sarawakian cuisine, leading to common misconceptions about both these noodles dishes.

Looks like we can only get authentic Sarawakian noodles in Sarawak itself!