Adults who are inactive or sedentary should eat the minimum suggested servings. 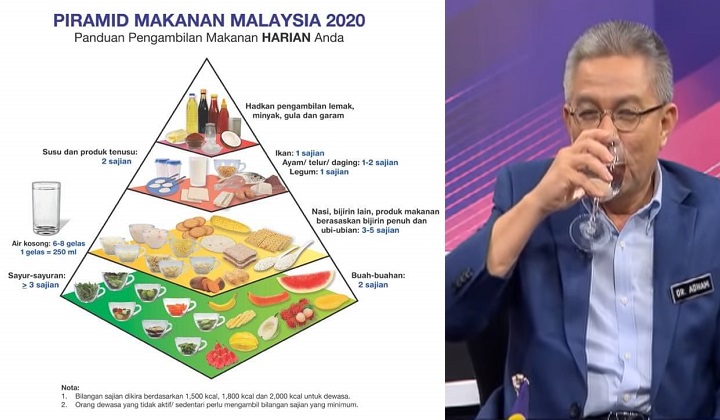 The Malaysia’s Nutrition Department, which is part of the Health Ministry (KKM), has released an updated food pyramid and there’s a major change in the order of carbohydrates, and fruit and vegetables.

Some of you might recall that older food pyramids suggested eating more carbohydrates than fruits and vegetables, placing bread and rice at the bottom of the pyramid.

This is no longer the case as, working our way up, the new pyramid advocates eating two servings of fruit and more than 3 servings of vegetables per day, and only 3 to 5 servings of carbohydrates.

At the top of the pyramid, the smallest point, the Nutrition Department suggests limiting intakes of fat, oil, sugar and salt.

Additionally, it adds that people should drink 6 to 8 glasses of water a day, assuming one glass is 250ml, which means we should be drinking between 1.5 litres to 2 litres per day.

It also states that adults who are inactive or live sedentary lives should consume the minimum suggested servings.

He encouraged people to increase their intake of vegetables and fruit as this is an important contributor in raising the body’s immune system.

Furthermore, drinking 6 to 8 glasses of water a day is good for the health and function of the body.

Dr Adham also stated that aside from being a dietary guide, the food pyramid was used in the planning of food production and imports.

In reviewing the food pyramid, among the matters taken into account are the population’s eating habits, and increases in non-communicable diseases related to diet such as obesity, diabetes and hypertension.