Are you eating chicken meat or mushroom “meat”? 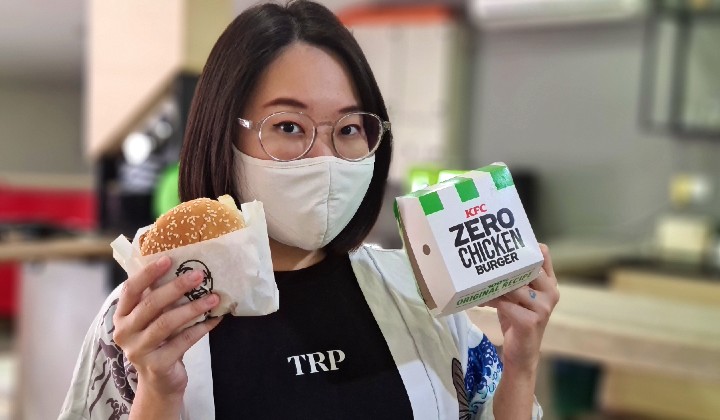 KFC’s new meatless Zero Chicken Burger claims to taste like chicken without actual chicken. This is their limited-time offering of a plant-based meatless protein to satisfy Malaysians’ growing appetite for alternative protein options.

Before we get into the details, do note that the burger is not vegan or vegetarian as the patty is cooked and prepared fresh with the same cooking equipment as other KFC products.

So how does the burger fare?

To be honest, the burger tastes, looks, and smells just like a normal chicken burger. In fact, if you gave this to someone and never told them that it’s a meatless burger, they most likely won’t even realize it’s not chicken.

Since KFC is using the same delightful Colonel’s secret recipe, the chicken burger smells and tastes exactly like the KFC Original Recipe chicken.

As for the texture, you would be hard-pressed to see a difference. It feels very much like chicken, although it doesn’t “shred” into strips like cooked chicken.

The burger is also topped with spicy BBQ sauce and mayonnaise, a slice of cheese, and freshly shredded lettuce. However, the sauce can be overpowering and drowns out all the other subtle tastes.

I can’t believe it’s not chicken

The Zero Chicken Burger is actually a collaboration with Quorn, a UK-based meat substitute product.

Quorn is made with mycoprotein, a type of nutritious fungus found in the soil called Fusarium venenatum, which is then fermented to grow.

This results in a meatless protein that shares a very similar texture with real meat, with a nice firm bite and a satisfying heaviness. Thus, it’s a suitable protein alternative for those looking to reduce their meat consumption. KFC also assures that the Zero Chicken patty is halal-certified.

If you’re interested in giving this meatless burger a shot, the limited-time item is already available for purchase at all KFC stores nationwide!