Just in time for CNY. 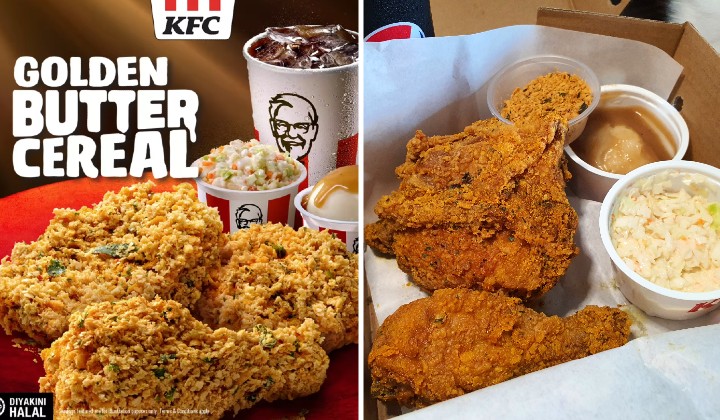 KFC has a brand new chicken flavour to tickle our tastebuds, and you might find it rather familiar.

The new Golden Butter Cereal flavour is strongly reminiscent of a popular Chinese Malaysian dish, the butter cereal prawn, in which prawns are cooked in fragrant butter then tossed with curry leaves and crispy sweet cereal bits.

It’s a common favourite especially with kids, but does the chicken version provide that same buttery sweet crunch?

The chicken itself has a generous coating of seasoning, but the cereal crumbs are given on the side to preserve that crunch. KFC is pretty generous with its cereal crumbs too, as each piece of chicken has its own little jar of topping.

Now, the chicken on its own is already a flavour bomb. It’s very savoury, with salty hints and a good touch of spiciness.

It leaves a tingle in your mouth, but despite its strong flavours, it’s not too overbearing or jelak.

The cereal crumbs on its own is definitely crunchy with a undertone of sweet. It actually helps to round off the stronger taste of the chicken’s seasoning, and can act as a refresher in between bites.

Since most of the flavour of the chicken is on its skin, you can also try dipping just the meat into the cereal crumbs directly as the juices will allow for a decent coat for a relatively lighter, sweeter flavour.

The Golden Butter Cereal is rather fitting to be released during the Chinese New Year season as it certainly feels like a party in your mouth. With the seasoned chicken and the cereal crumbs coming separately, it actually does feel like two flavours in one, depending on which one you like better.

All in all, it’s quite delicious, doing a good job of adding a bit of excitement to regular fried chicken with its savoury sweetness. The cereal crumbs are good enough to eat on its own too, if you have leftovers.

If you enjoy fun food flavours and textures, this is worth trying.