Not the sea-salt ice-cream you’re looking for, but good nonetheless. 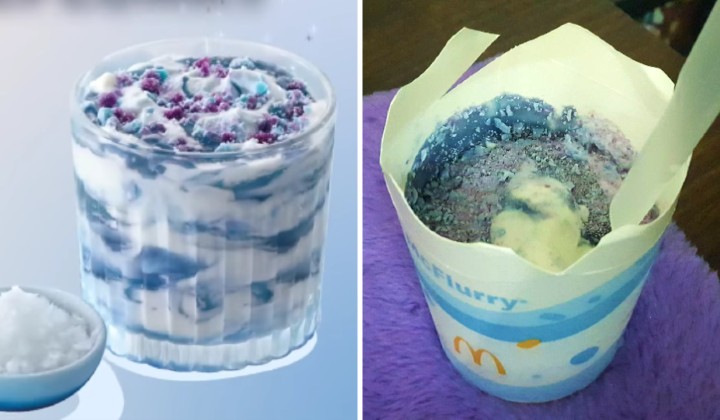 The pastel-blue tint of sea salt ice cream from the faraway land of Japan has made its way to Malaysian shores recently, brought here by brands like Family Mart and Sukiya.

While the popular game franchise Kingdom Hearts had shot the salty-sweet treat into mainstream popularity within the West, game director Tetsuya Nomura noted that he actually tried the real ice-cream at Tokyo DisneySea and loved it, hence why he added it to the games.

Now, McDonald’s Malaysia is bringing the flavour to its stores as well, in a dreamy swirl of blue-and-purple.

This is perhaps the biggest warning to Malaysians who may have tried previous renditions of the sea-salt ice cream from other brands: the McDonald’s Sea Salt McFlurry is not anything like what you are expecting!

Perhaps the biggest question is why the theme of sea-salt, because the ice-cream frankly does not have the taste of salt at all.

That’s not to say that the ice-cream isn’t absolutely delicious. It is also 100% FUN.

Not only is the McFlurry extremely pretty to look at, it actually does a great job of elevating the usual McDonald’s vanilla soft-serve.

The blue syrup streaks taste sweet, like cotton candy, and the crunchy confetti bits on top lend a nice bit of crunch and texture to the whole thing. The confetti bits are essentially usual edible sugar confetti, commonly used for baking, but are surprisingly not super sweet sugar bombs.

Paired together, you get what is essentially a vanilla McFlurry elevated with generous helpings of light crunchy textures, smooth syrup, and dreamy colours.

If you are a fan of the flavour “birthday cake”, which is essentially vanilla cake with sprinkles, then you will love the Sea Salt McFlurry, which is the same thing but blue and in ice-cream form.

Despite the misnomer, the Sea Salt McFlurry is a surprisingly pleasant addition to McDonald’s line of desserts. Just don’t expect it to taste like actual sea-salt ice-cream. (Personally, I hope it stays permanently.)