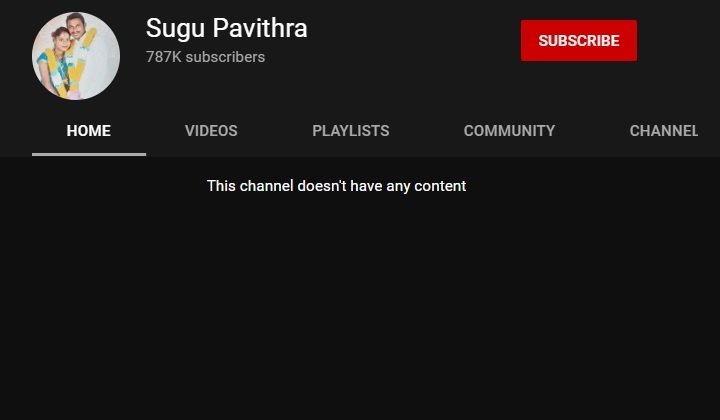 All videos on the phenomenally popular Malaysian YouTube cooking channel Sugu Pavithra appear to have been mysteriously deleted.

The channel used to feature local recipes and cooking guides by husband and wife couple M. Sugu and S. Pavithra in Bahasa Malaysia.

Within the span of a few months, the couple garnered over 785,000 subscribers, a silver YouTube Button, and even drew the attention of Prime Minister Tan Sri Muhyiddin Yassin who met them in person and presented them with some supplies.

However, this latest development follows the recent arrest of Sugu who was charged on July 24 with possession of a dangerous 26-inch sickle in public under Section 6(1) of the Corrosive, Explosive, and Dangerous Weapons Act 1958.

He allegedly had the weapon at the parking lot of Hospital Permaisuri Bainun on July 21 at around 6pm, though it was said to have been in his car, and not on his person.

If convicted, he could face not less than five years and not more than 10 years of imprisonment, and whipping. His of RM10,000 was paid by his wife.

Sugu had allegedly attacked his wife S. Pavithra at a hospital parking lot. Apparently, the couple had been quarreling since Monday and Sugu hit Pavithra while under the influence of alcohol.

Later on, a nurse then called the hospital guard reporting of a drunk man brandishing a grass sickle about to enter the hospital. Sugu was then arrested by the police over domestic abuse allegations.

However, Pavithra withdrew her report and said that the issue was a private matter between husband and wife.