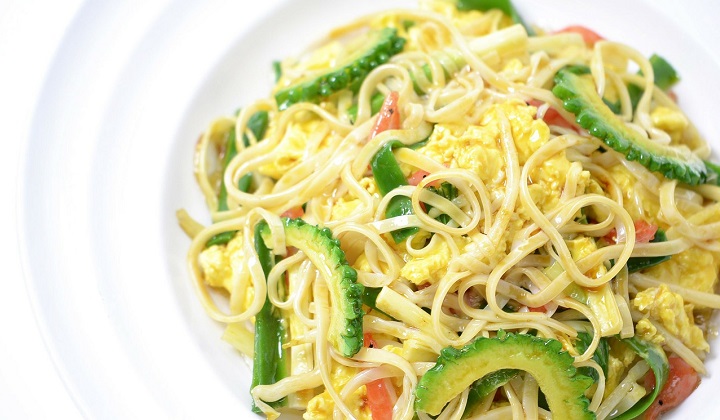 Japanese cuisine has always been distinct. It has introduced the world to iconic staples of sushi, sashimi and ramen amongst others. So it would be a bit hard to imagine their food as anything other than, well, Japanese.

But it turns out that Japanese food is a lot more culturally blended than one would think. In the tropical island prefecture of Okinawa is a comfort dish that has kept the islanders satiated for centuries, and its origins lie in Southeast Asia.

Chanpurū, sometimes called champuru, is a stir fry dish that is considered to be the representative dish of Okinawa. You can find it practically everywhere in the island, from the home to the izakaya, day and night.

The most popular iteration of this dish is gōyā chanpurū, made with gōyā (bitter gourd), tofu, egg and either Spam or thinly sliced pork.

On the surface this dish would seem like any other Japanese style stir fry dish, but the dish is almost entirely a Southeast Asian creation.

For one, the word “chanpurū” means “something mixed” in Okinawan. This term actually originates from the Malay word “campur” which also bears the same meaning. The bitter gourd star of this dish is also a Southeast Asian import that was said to be introduced to the prefecture in the 15th century.

During the glory days of the Malacca sultanate around the 15th century, the relationship between the Ryukyu kingdom (Okinawa) and the Malay Archipelago was highly prosperous. The two regions were connected in trade as early as the 14th century, long before mainland Japan began earnestly sending trade ships to the region in the 1600s.

Between the 14th and the 16th century, Ryukyu was the broker for the major trade in East Asia. It acted as an entreport where Japanese products such as silver and swords were exchanged for other items in China, such as sappan wood and deer hides, which were sourced from the Malay Archipelago.

As a result of the robust trade, the maritime kingdom essentially became a cultural melting pot of East Asian and Southeast Asian culture. In fact, the term chanpurū is also sometimes used to refer to the culture of Okinawa, which is a mix of Ryukyuan, Chinese, mainland Japanese, Southeast Asian and North American culture.

While chanpurū began as a Malay import, it is now known as a quintessential dish in traditional Okinawan diet, believed to be the reason why these island people are amongst the longest living people in the world.

A typical Okinawan meal consists of a local version of miso soup, sweet potato, the special Okinawan soba (made of wheat), chanpurū and mozuku seaweed or umibudo sea grapes. Pork is also featured extensively in the cuisine and the local breed, Agu, is often called the “wagyu of pork.”

Altogether, these dishes are known as the soul food of Okinawa- not only because it’s good for the soul, but also because it’s a reflection of centuries of tradition, culture and the spirit of the people themselves.

In the izakayas across Okinawa, people bond over these ancestral dishes, singing and dancing along to folk songs that harken back to the maritime might of the Ryukyu kingdom.

TRP would like to thank AirAsia X and Japan National Tourism Organization (JNTO) for making this trip happen. The low-cost carrier‘s KL – Okinawa route flies 4 times a week, with a short layover in Taipei.