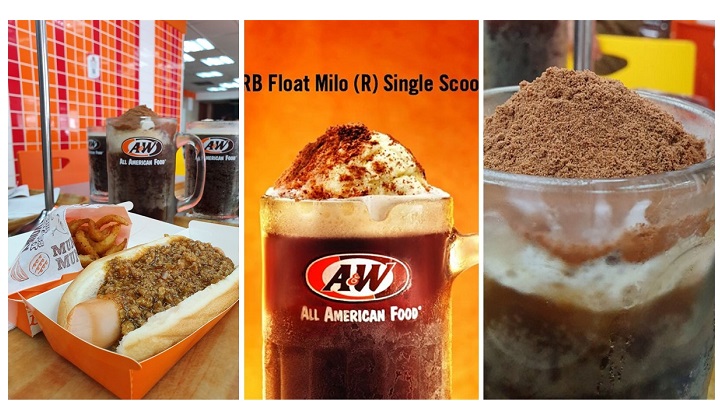 The last few weeks have been very interesting in the Malaysian
fast food scene.

KFC brought back Double Down, Mc Donaldâ€™s challenged us with their Extra Spicy Ayam Goreng McD and even myBurgerLab went a bit wild with their Krispy Kreme doughnut burgers.

Well, it seems like A&W Malaysia is joining the party because theyâ€™ve just released a new drink thatâ€™s probably the most ambitious crossover since Avengers Infinity War.

No, this is not a joke. The fast food chain has introduced
the RB Float Milo to their menu from 13th September.

We understand that you are confused. Milo andâ€¦ root beer
float? WHAT???

What Wide Awake GIF from What GIFs

Thatâ€™s not the only addition, though. Thereâ€™s an intriguing Sichuan
Mala Coney that was also released on the same date.

Additionally, the two new A&W menu items are available in a combo set with curly fries at RM 16.90.

Perplexed, bewildered and mostly intrigued, we shot off to the nearest A&W restaurant to try out these strange new additions. Hereâ€™s our honest opinion:

The A&W staff prepared the drink right in front of our eyes and the recipe is basically this:

This writerâ€™s Milo Root Beer Float started bubbling up and after 5 minutes, it looked likeâ€¦ this:

Meanwhile, the Sichuan Mala Coney looked like a good olâ€™ coney dog. A nice sausage nestled in a bun with tantalising meaty topping. Interestingly, it had a very promising spicy aroma.

When you take a sip, you taste either the root beer float or
the Milo.

The Milo powder also did not dissolve in the drink, so there
were a lot of chunks floating at the top.

You also wind up chewing these clumps after taking a sip-
which isnâ€™t necessarily a bad thing because, well, Milo.

However, the Milo Root Beer Float is something that probably only works in a test kitchen as a curious experiment for Milo stans.

What about the Sichuan Mala Coney?

Well, this one is fantastic.

In all honesty, it tasted just like Mala, but
not as spicy.

The spice level is at Malaysian level, which is pretty good.
You wonâ€™t be sweating buckets, but it leaves a nice tingle on your tongue.

If youâ€™re curious to try out these new additions to the
A&W menu, do hurry as itâ€™s available for a limited time until 25th
October.

Are you willing to give the Milo Root Beer Float & Sichuan Mala Coney a try?
Let us know on TRPâ€™s Facebook,Â TwitterÂ &Â Instagram!