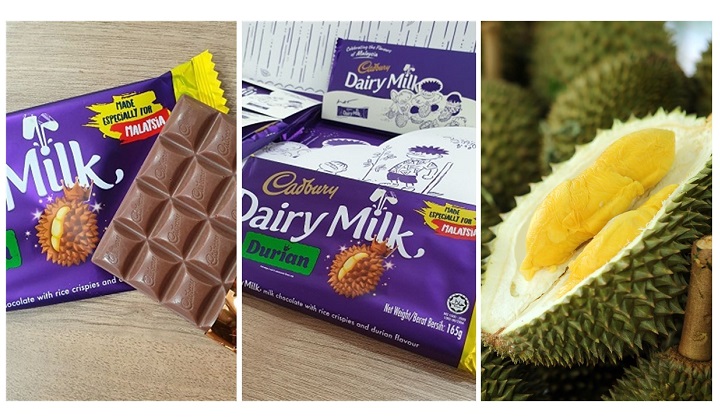 While durian season is nearing its end, the madness for the King of Fruits continues with Cadbury Malaysia’sDURIAN CHOCOLATE.

Now, durian chocolate is not a new concept. The cocoa-fruit combination has been seen on shelves of numerous shops near tourist spots and at airports.

This is, however, one of the rare few occasions where the durian
chocolate is sold nationwide.

Released for the Merdeka & Malaysia Day season, Cadburyâ€™s Dairy Milk Durian chocolate is supposed to be a celebration of local flavours.

With the background settled, letâ€™s dive in!

No doubt, the Lat illustrations is a big win!

On the durian chocolate itself, the iconic fruit proudly wears a crown while a â€œMade Especially for Malaysiaâ€ tag sits at the corner.

Besides that, we like the jagged golden sides that kinda
resembles a durianâ€™s prickly thorns!

Hereâ€™s where things start getting interesting.

The moment the plastic pops open, you immediately get a
whiff of durian aroma thatâ€™s similar to the smell of dodol.

The chocolate itself looks rather nondescript, except for
the rice crispies popping out at the back.

To be perfectly honest, the durian chocolate isnâ€™t the best.
Nor is it the worst.

The durian flavour is more of an aftertaste and eating it was
a dÃ©jÃ  vu of noshing on the durian popcorn snack that was all the rage back in primary
schools.

If youâ€™d like to get your hands on the durian chocolate and try it yourself, you better hurry as the aromatic chocolate bar is only available until 30th September.

Cadburyâ€™s Dairy Milk Durian chocolate can be found in major
hypermarkets and supermarkets at RM8.50. The limited-edition gift set with Latâ€™s
drawings are sold exclusively on Shopee for RM42.90.