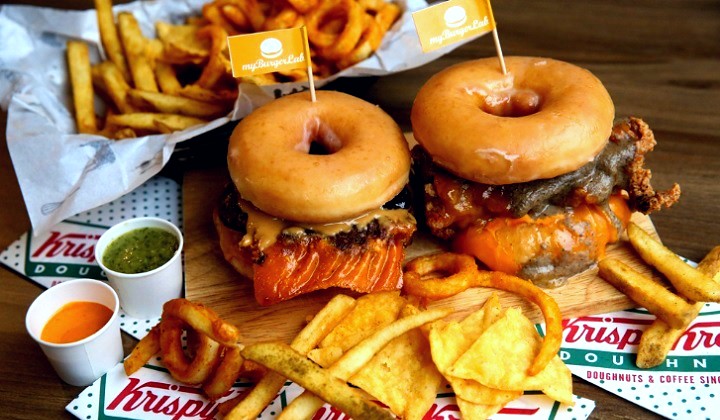 Remember when someone called Malaysia the America of Southeast Asia on Twitter?

Looks like weâ€™re truly living up to that title because
DOUGHNUT BURGERS HAVE ARRIVED IN MALAYSIA!

My Chest GIF from Mychest GIFs

Yes, friends. The sweet, fried ringed bread has found a new mate of meat and cheese.

The minds behind this madness is Krispy Kreme and myBurgerLab, who have partnered up to bring us this union.

According to Malay Mail, the flavour is akin to fried chicken waffle. Which means that the burger is definitely on the sweeter side.

Thatâ€™s not the only sweet-savoury creation though, thereâ€™s another
doughnut burger called The King.

Why create this heart-stopping burger?

This also isnâ€™t out of the ordinary for them. Theyâ€™ve partnered with Nandoâ€™s and BIG Group on the past to create equally shocking creations like the Peri-Peri burger and Big Mac & Cheese burger respectively.

While the thought of a doughnut burger may be perplexing, do
bear in mind that there is some good that comes out from this.

For each doughnut burger sold by myBurgerLab, a RM10 donation will be given to Shelter Home for Children.

Okay, youâ€™re a gutsy one!

The Krispy Kreme doughnut burger will make its debut during Artbox 2019 at Sunway City from 6th to 9th September.

After that, you can head into any myBurgerLab outlet from 16th September onwards and put your arteries to the test.

Let us know if youâ€™ll be giving this doughnut burger a try on TRPâ€™s Facebook, Twitter, andInstagram!