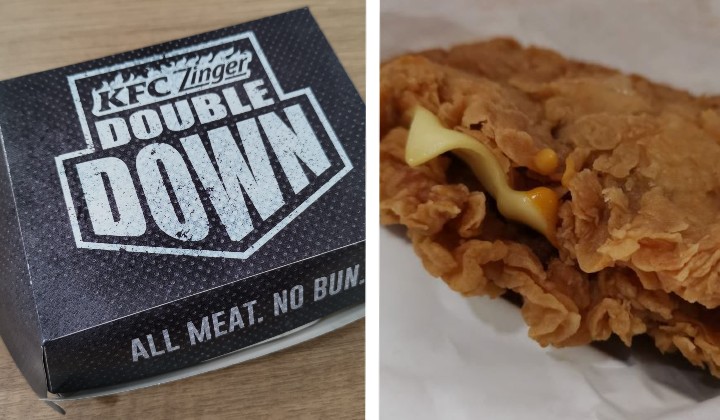 If you didn’t know, KFC’s Double Down just dropped into town again.

If you’ve never tried the KFC Double Down, firstly, how dare you. Secondly, don’t worry- we’re here to give you all the juicy deets.

The Double Down is a meat burger consisting of deep friend white chicken fillets sandwiching a chicken strip and drizzled generously with their delicious cheese sauce.

It’s basically a heart-attack in a box but it’s so delicious and there’s no going back.

Upon unwrapping, what stood out was that the Double Down was less oily and much bigger than we remembered it to be.

The chicken was juicy and tender, with the cheese sauce making a lovely addition to the meat. The skin was crispy without feeling overwhelmed by flour.

Possibly because of the size, we were rather full long before we finished the Double Down. It can get dry after a while as well, so feel free to dip as much sauce as you want.

As usual, you can get the Double Down ala carte or with a combo. The Double Down is only here for a limited time, so get yours before it’s removed from the menu again.

It’s not bad, but certainly not like the usual waffles we’re used to at other dessert spots.

The fried texture is crispy and hard, but also oddly brittle and can taste a little greasy. Most of the chocolate sauce also accumulates at the bottom of the cup and can be hard to dip.