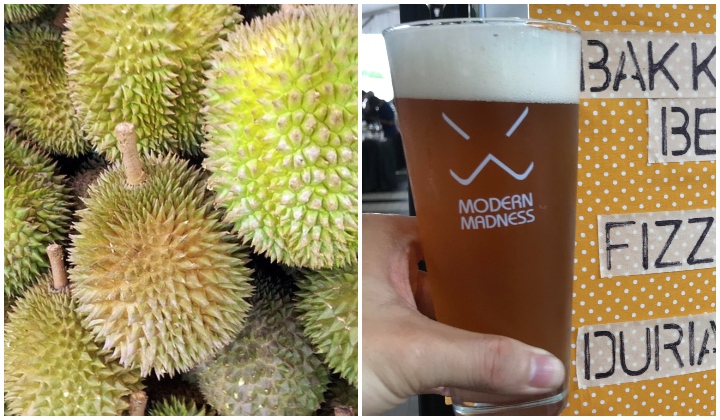 Durian beer is a thing!

Durian and beer. Beer and durian. Together. In one drink.

But how are you feeling? You alright, bruh?

Once youâ€™ve recovered from the news of this existence, you
could possibly hop into a bar nearby to try it out.

This durian beer is brewed locally and available
in KL.

The brains behind this operation is Kennhyn Ang, co-founder
of Modern Madness, a range of Malaysian made beers.

Now before you run off and try to brew your own beer, you should know that itâ€™s extremely hard to get the license to brew beer in Malaysia because there is a limit on the issuance of brewing licenses.

So how the heck did Kennhyn and the gang manage to brew the durian beer?

â€œYes, the beer is brewed in Malaysia. But since we donâ€™t have license to brew beers, I like to call what we do as â€œreverse brewingâ€.

We purchase beer that already paid duty and add on the local flavours to it.â€

What it means is that instead of boiling in the flavour at the beginning of the brewing process, the flavour is added after fermentation.

Has taken a few attempts to get this right, but by George I think we’ve got it! Durian beer!#KL #Beer #Durian pic.twitter.com/v5lUmzb4hu

According to Kennhyn, the process in making the durian beer takes about a week with roughly 10 tries to get it juuust right.

It involves A LOT of testing and A LOT of tweaking.

Well, each batch tastes a little bit different, so itâ€™s hard
to say.

â€œWhile we need to have the durian taste, we also have to figure out how to make it drinkable.

Itâ€™s much harder when we use fresh fruits rather than flavouring. Hence, each batch also have different flavour from different durians we use.â€

This writer has tested the durian beer for herself, the
first one tasted like dodol (yum) while the second one kinda
tasted like liquid durian (also yum, no joke).

Basically, durian beer has the same effect as durian fruit. Some love it, some hate it. Such is the power of the King of Fruits.

If you’re wondering if the durian beer is heaty, we also have no idea. But we can already feel the judging looks from all the Chinese mothers out there.

If youâ€™d like to try this aromatic brew for yourself, you can waltz into REXKL at Petaling Street orAles & Lagers in Publika.

Best to hurry though, as the durian beer is only a temporary
guest, made only for special occasions. Plus Kennhyn says its not his favourite
to make because it stinks up the place. In his exact words:

â€œNever mess with the king of fruits.â€

Once youâ€™re there you can actually try out a whole range of
Malaysian flavours IN BEER like Bak Kut Teh, Teh Tarik Ale
and Rosella Ale (hibiscus).

Today’s lineup at #RexKL. It’s hot out there. Why not pop by this afternoon for a refreshing drink. Open now till late. #Beer pic.twitter.com/iJKWN210D6

Liquor-Related Work A Dilemma For Muslims