The joint project by Fourier Intelligence and the University of Melbourne Robotics Lab is set to revolutionize physical therapy and rehabilitation. 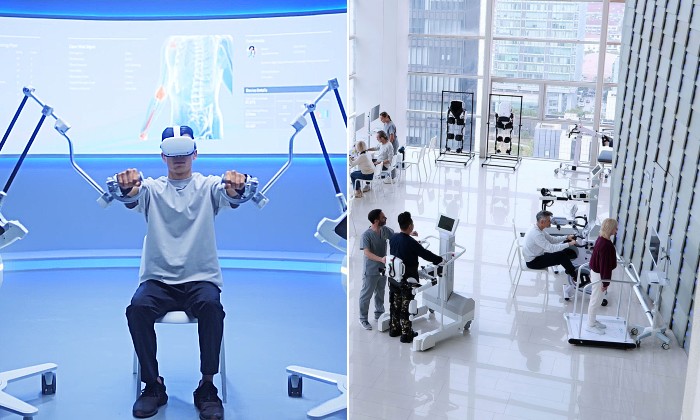 It is also the first of its kind to apply an end-effector based concept into a 3D movement, making it multifunctional and transparent.

This cable-driven mechanism combined with a four-linkage structure also perfectly reduces the friction and inertia during the movement of the system.

The ArmMotus™ EMU, which was jointly built by Fourier Intelligence and the University of Melbourne Robotics Laboratory, was a project that was led by Professor Denny Oetomo for the past two years.

The robot offers large workspace with very minimal resistance and reflected inertia which allows the patient to move freely. Combining with the appropriate gravity compensation of the weight of the arm, patients with weak or little arm function can undergo therapy without exertion.

Zen Koh, Co-Founder and Global Hub CEO of Fourier Intelligence, believes that the ArmMotus™ is instrumental in changing the future of neurorehabilitation.

The on-going COVID-19 pandemic situation has challenged the conventional therapy method and as a result, many neurological patients are not receiving sufficient therapy. The new ArmMotus™ EMU helps to overcome that problem by providing clinical intelligence, personalised therapy, technology -based solutions and remote monitoring.

Besides the ArmMotus™ EMU, Fourier Intelligence also provides many other comprehensive rehabilitation solutions that cover both the upper and lower limbs as well as balance and coordination.

These devices are under a concept called the RehabHub™, which not only covers the diverse training needs of patients from different stages of rehabilitation, but also make the rehabilitation training quantifiable, fun, and motivating through gamification therapy.

Fourier Intelligence is not a stranger to the rehabilitation field in Malaysia.

Many of their devices are currently installed in hospitals and centres such as Sunway Medical Centre, Ramsay Sime Darby Medical Centre, International Islamic University Malaysia (IIUM), WQ Park and many others.

Besides installations, they also have established MoU partnerships with local universities such as University Malaya (UM) and Universiti Tunku Abdul Rahman (UTAR) for collaborative research in the field of rehabilitation technologies.

Covid-19 Might Make You Lose Your Hair, According To Study

No, COVID-19 Is Not In Your Tap Water; MoH Confirms It Is Not True