People of conscience around the world who are unable to tolerate the illegal invasion of Ukraine by Russia must also reject the illegal European settler-colonial Zionist project in Palestine. 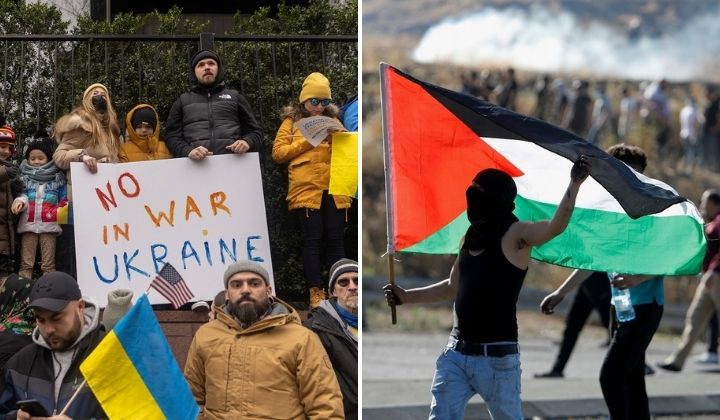 In a recent interview published by The New Yorker magazine, Professor John Mearsheimer from the University of Chicago stated that the current Ukraine-Russia conflict actually started in April 2008, at the NATO Summit in Bucharest when NATO announced that Ukraine and Georgia would become part of NATO.

According to him, the Russians immediately declared that such a move by NATO would be an existential threat to it and that they will not allow that to happen.

However, the United States and other NATO members chose to simply ignore Russia’s warning and proceeded to make Ukraine a Western bulwark on Russia’s border.

Mearsheimer is therefore not surprised that Russia decided to invade Ukraine as a necessary strategy to remove the threat.

However, that does not mean that Russia’s action is justified under international law. In an article published by The Conversation, Prof Hurst Hannum, Professor of International Law, Fletcher School of Law & Diplomacy, Tufts University stated that, “Under no scenario is Russia’s armed invasion of Ukraine legal under contemporary international law and norms.”

He also added, “Nothing that Ukraine has done to date could be construed as an “armed attack” on Russia which would justify any Russian claim to self-defence.”

It is therefore not surprising on 2 March the United Nations General Assembly in a rare emergency session called by some members of the U.N. Security Council, overwhelmingly voted to censure Russia for invading Ukraine and demanded that Moscow stop its offensive and withdraw its military forces. The resolution was supported by 141 of the assembly’s 193 members.

The current move by many countries to financially isolate Russia is therefore very justified. In fact, if Russia refuses to withdraw from Ukrainian territories that it has occupied, the world should implement a policy of full-scale boycott, divestment and sanctions (BDS) against Russia.

Failure to act decisively against an illegal invasion or colonisation of a sovereign country will invite more belligerent behaviours by states that have no regard for international law, especially those that possess superior military powers compared to others.

However, in order to be consistent in their rejection of any illegal invasion and colonisation of a sovereign country, the international community should immediately implement a policy of boycott, divestment and sanctions against Israel also. This is because Israel too has invaded and illegally colonised Palestine since before 1948.

As explained in great detail by Professor Ilan Pappe in his book “The Ethnic Cleansing of Palestine”, Israel only came into nascent being when Zionist settlers from Europe came to Palestine beginning in the early part of the 20th century.

These settlers later engaged in ethnic cleansing crimes in their bid to colonise the land and set up a new homeland for Jews.

They were very clear from the beginning that their project in Palestine was not merely a colonial project but a settler-colonialist project, a view echoed by many experts on the history of Palestine including Professor Scott Burchill from Deakin University in Melbourne and Associate Professor Peter Slezak from the University of New South Wales in Sydney.

The Zionists implemented their plan ruthlessly, employing paramilitary gangs that carried out murderous attacks on Palestinian villages thereby forcing more than 750,000 Palestinians to flee their homeland and become refugees, before announcing in 1948 the creation of Israel.

Not only were the refugees prevented from returning to their homes, the Zionists in 1967 continued to acquire more Palestinian lands in East Jerusalem and the West Bank when Israel carried out a premeditated attack on the Arab armies.

To overcome the complication of having a large number of Palestinians who remained and did not flee from the newly acquired areas, the Zionists subject them to continuous military occupation.

In this way Palestinians can never obtain their rights as citizens of Israel, thereby preserving the Jewish majority in Israel.

For the Zionists, Arabs are allowed to exist but their existence in the West Bank is in the form of lesser human beings, confined to some Bantustans or enclaves. In the meantime, Israel continues to expand the number of Jewish-only settlements in the West Bank.

It is not a surprise that three reputable human rights organizations, the latest being Amnesty International, have concluded that Israel is committing apartheid, a crime against humanity, towards Palestinians.

In conclusion, people of conscience around the world need to be consistent. Just as they are unable to tolerate the illegal invasion of Ukraine by Russia, they must also reject the illegal European settler-colonial Zionist project in Palestine.

Moreover, they should also highlight the apartheid nature of the Zionist state and the need to boycott it until it stops its systemic oppression of the Palestinians.

Freedom, justice and self-determination are not only for Europeans with light skins and blue eyes, but for all human beings around the world.

Anything else is hypocritical.

Malaysia Must Treat Refugees With Dignity And End Their Continued Persecution