The movie was a satire but the plot hits close to home. 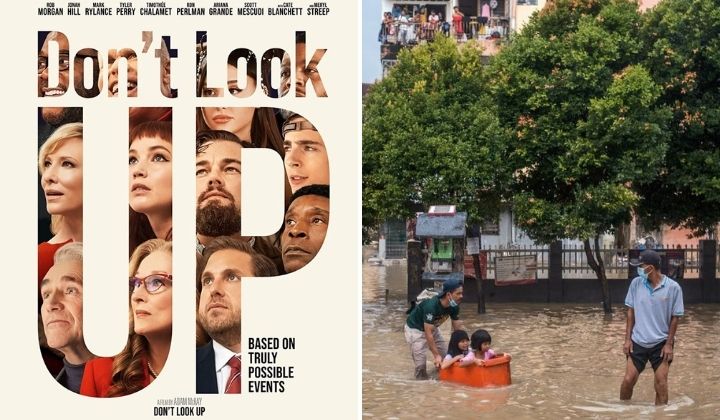 I was disturbed after watching the newly released Netflix movie about a comet hurtling towards Earth. It wasn’t the possibility of the planet-level extinction that bothered me; it was the callousness of those in authority that did it.

Although the movie was clearly a satire, depicting the White House and agencies trying to reassure the population not to panic (hence movie title, ‘Don’t Look Up”), they were clearly procrastinating for political and financial gains.

Some of you may already be experiencing a real-world “Don’t Look Up” in your locality – resulting from a mishmash of decisions and actions between local and federal authorities in dealing with emergencies such as tornadoes, earthquakes, and dare I say pandemic?

In Malaysia, it was floods in the past week. December is typically monsoon season, and flooding was to be expected.

However, 48 hours of continuous downpour last weekend overwhelmed rivers and drainage systems everywhere, causing them to overload and cause massive floods – as expected.

What was unexpected was the scale of this in urban areas, especially low lying ones in the Klang Valley. Flash floods came without warning.

Highways and roads around built-up areas were completely inundated in several feet of water, causing drivers to abandon vehicles to swirling waters in the hundreds. Thousands of homes, shops, offices were all submerged. Homes had electricity cut off as substations were flooded.

Reports came of tens of thousands of people affected and families trapped in the waters. For days afterwards, stories of NGOs, charities and volunteers helping out were in the news.

One would need to have a heart of steel not to be moved.

Indeed, stories started pouring in from all directions – social and mainstream media – of volunteers taking their boats and kayaks out to flood areas to rescue those trapped and distribute food and water, of requests for donations from all corners and to house those displaced until the waters subside, which was still there after a week. Civil society from all corners had sprung into action.

Humanity came through different forms – even the boss of a large grocery chain forgives with an open heart the people who had to scramble for food in his stores in order to stay alive. They had no choice, he said. Help took time to arrive and it was almost impossible for anyone to enter or leave these areas. The flood affected all in the area, irrespective of race or creed.

More importantly, we all looked up and realized the flood, like the comet, will affect us all.  It is the humanity in us that needs to survive.

Inevitably, we shall learn lessons here and come up with a better way to deal with these kinds of challenges for society and humanity. Art may imitate life, but life should not imitate art.

ET Tan believes we need to be more human; together we can build a stronger, more innovative and inclusive culture.