“Protest is necessary to express our views, however, I fail to see the way in which this protest will help the Covid-19 situation.” 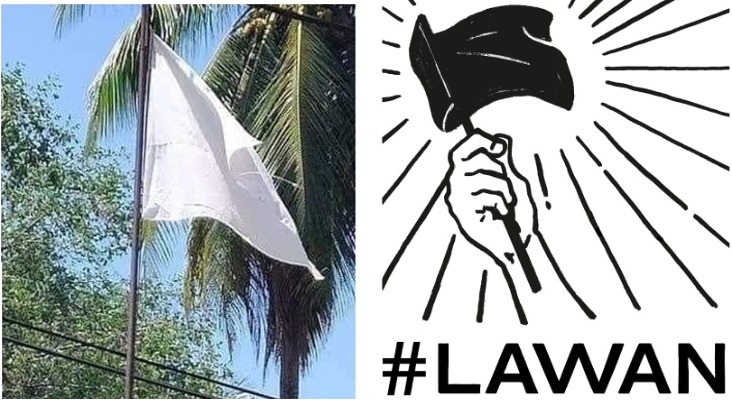 The white flag (#benderaputih) campaign was created to help less fortunate Malaysians who are struggling to cope during the Covid-19 crisis. Starting from quiet rumblings on Twitter and Facebook, it has grown to encompass the goodness and compassion that Malaysians have to offer.

The concept is simple: if you are in need, fly the white flag and your neigbours and the online community will come to your aid. On the basis of this simple concept, food banks have been created, aid has been sent to old folks’ homes in need and even foreigners have been given aid.

In particular, a group of foreigners in Taman Tun Dr Ismail (TTDI) who had all lost their jobs were openly aided by Malaysians from all walks of life. The beauty of Malaysian’s generosity was seen in how race and religion were not considered a factor, and given the political climate, it could have easily gone the other way.

The red flag (#benderamerah) campaign works in much the same way as the white flag campaign: raise a red flag and your neighbors and the online community will come to your aid. The only difference being that in this case the targeted aid is given to Malaysians struggling to feed their furry friends.

The campaign was started by the Malaysian Animal Association as, due to the economic conditions brought on by Covid-19, many have families have been abandoning their pets.

The black flag (#benderahitam) campaign was created to express dissatisfaction with the Malaysian government. The mentions seen on Twitter and Facebook are often accompanied by the hashtags #lawan. At close to 200,000 mentions, it is the number one hashtag at the time of writing.

I offer a caveat that protest is necessary to express our views, however, I fail to see the way in which this protest will help the Covid-19 situation.

The protest comes with three demands. Firstly that the Prime Minister steps down, secondly that Parliament is opened immediately, and thirdly that there be an end to the emergency.

The problem with this is that if Prime Minister steps down, there are only two things that can happen; A ‘back door’ Government is formed based on who can convince the Agong that he has the majority of the support necessary, or the other possibility is another election.

Given how Covid-19 cases spiked after the Sabah elections, I am not in favor of another election as it will only put more strain on our already strained healthcare system. This is especially undesirable as the Delta variant is making waves throughout the country.

As for the argument that a new Government be formed, I question who will take the lead and what will this coalition consist of. At this time, there doesn’t appear to be any viable stable alternative.

As for parliament being opened, I agree it should be opened but there needs to be a safe online alternative. It’s not logical to have 222 politicians from all over the country convene in a single room.

That’s 222 elected MPs who have drivers, special officers and those in ministries will also bring along their ministerial aids.

Along with policemen and those holding other roles at the parliament building as well as the press, this number could easily balloon to 1,000 people in a single location. This is not even including the Dewan Negara which consists of another 70 people.

If the estimated 1,000 people end up going home or crossing states, that poses a huge risk to the healthcare system and everything that everyday Malaysians have suffered in helping to reduce the number of Covid-19 cases in Malaysia.

Parliament should be opened and the emergency should end but we need to stop managing symptoms and look instead at what actual outcomes we seek.

To join a movement in protest is noble but to do it for the wrong reasons is a whole other thing.

As such, I for one will just be on the lookout for white and red flags.