Could all this carnage be avoided if Hamas had refrained from attacking Israel? 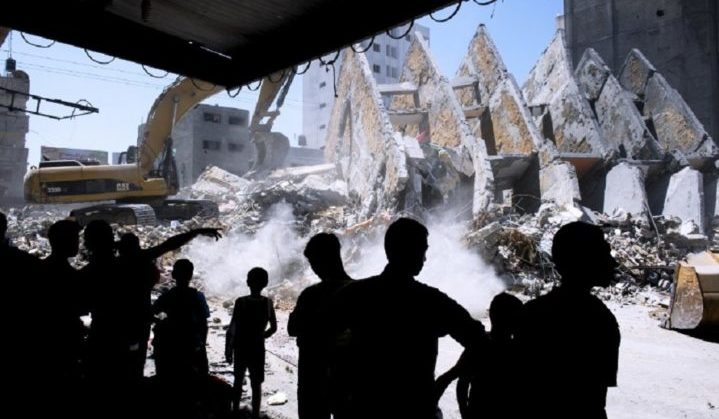 Palestinians watch as the rubble left from a collapsed building that was targeted by Israeli air strikes overnight is cleared off a street in Gaza City on August 26, 2014. Israel stepped up the pressure on Hamas on day 50 of a bloody confrontation which began on July 8 and has claimed the lives of more than 2,100 Palestinians and 68 on the Israeli side. AFP PHOTO/ROBERTO SCHMIDT

On May 21, 2021, Israel agreed to halt its recent spate of brutal attacks on Gaza which had claimed the lives of almost 250 Palestinians, including more than 60 children and around 40 women.

More than 1,100 houses, as well as 156 towers and residential buildings, are completely destroyed.  In addition, 73 government offices and 57 schools and health clinics are severely damaged.

Some questions that may be playing in the minds of some people are: is this all a mistake on the part of the Palestinians themselves, especially Hamas that governs Gaza?  Could this be due to their own fault in inviting Israeli outrage by firing rockets at several cities in Israel recently? Could all this carnage be avoided if Hamas had refrained from attacking Israel?

Interestingly, the above questions are often asked by Malaysians who are hardly involved in campaigns or activities to defend the fate of Palestinians.

They are Malaysians who only very occasionally read the news on the Palestinian issue and, as a result, have the mistaken perception that the normal situation in Palestine is calm and peaceful and that suffering of Palestinians only comes about when they decide to attack the Israelis.

On the other hand, among those who are directly involved with promoting the Palestinian cause, including non-Arabs and non-Muslims in Europe and the United States, the above questions have never been raised.

I say so with confidence because as the chairman of the BDS Malaysia movement, I interact a lot with pro-Palestinian non-Muslim activists from Europe and the US. In our discussions, I have never heard any criticism of Hamas, including over the recent launching of rockets towards Israeli cities.

Likewise, the average Palestinians, whether in the West Bank, Gaza, or historic Palestinian territory (now called Israel) and even outside Palestine, there is also no blame on Hamas.

In fact, almost all Palestinians, including those who are non-supporters of Hamas, are voicing out a collective feeling of pride over the recent display of defiance towards Israel. For them, the recent uprisings prove that Palestinians are a people with enduring pride, dignity, courage, self-respect, and perseverance who will never give up their struggle for freedom and self-determination.

This point is further emphasized following the declaration of ceasefire by Israel. Palestinians could be seen erupting in joyous happiness.

For them, they have won the battle against their colonizers, even if the war has not been won yet. On the other hand, Israelis are treating it more like a defeat as can be seen on the subdued faces of Israeli soldiers.

The most important determinant of a person’s perceptions towards the recent episode of Zionist brutality in Gaza and Jerusalem is his or her degree of awareness of the history of struggle for justice and freedom in Palestine.

For those who are very aware, the recent actions by Hamas and the show of defiance by Palestinians are simply a part of a long and continuous struggle to liberate their land from a cruel and repressive settler-colonial regime consisting of Zionists who came from Europe.

For those who are willing to dig deeper into the early history of the struggle, they will also learn that the Zionists paramilitary forces engaged in countless atrocities towards Palestinians, including the infamous massacre in Deir Yassin, a village near Jerusalem, on April 9, 1948 where around 130 Zionist terrorists from the Irgun and Lehi paramilitary groups killed 107 Palestinians including innocent women and children.

This ethnic cleansing process resulted in more than 750,000 Palestinians being forced to flee their hometowns and become refugees. It was part of the Zionist plan because, in this way, the Zionists could happily place Jewish newcomers from Europe in the Palestinian territories.

The names of Palestinian villages and cities were even changed to new Hebrew names so that their Palestinian identity could be eradicated altogether.

More and more in the international community are declaring Israel an apartheid state https://t.co/1My21t8M83

In 1948, the European Zionist settlers declared the birth of their new state called Israel, which was immediately recognized by the United States. President Truman, realizing the strong influence of the Zionists, who were in control of many financial and media organisations, decided he needed their help to win his re-election bid.

He, therefore, decided to recognize Israel despite vehement opposition from his secretary of state George Marshall, and despite the fact that Israel was actually an illegal state since it was established through the crime of ethnic cleansing of Palestinians.

As the Zionists’ plan was to take control of even more Palestinian territories, including the West Bank, they continued their offensive moves. In 1967 they managed to seize East Jerusalem, the West Bank, and even the Golan Heights.

In fact, they have opened new settlements (actually new towns) in territories seized from the Palestinians. Under the Geneva Convention and several UN resolutions, these are all illegal colonies of an occupying power.

To increase the process of ‘Judaization’ of the West Bank and East Jerusalem, various laws were passed that made life difficult for Palestinians such as not allowing them to build houses on their own land or add space to those houses.

Thousands of houses built by Palestinians were also demolished and their olive groves confiscated by the Zionists.

Travel restrictions were also imposed on Palestinians who had to queue for hours to go from one place to another in the West Bank. Failure to follow instructions can be fatal, and many Palestinians have been killed at the checkpoints manned by Israeli soldiers.

In the West Bank, Israeli soldiers can storm through the front door at any time into the homes of Palestinians to conduct operations, even during the evening. Imagine the impact on the private lives of Palestinian families. It is also customary for the soldiers to then go to the next house by breaking a huge gap in the sidewall of the house, causing tremendous damages to Palestinian homes.

Palestinians are also not free to attend prayers at the Al Aqsa Mosque. The Israeli military will control access to the mosque even though it is located in East Jerusalem which is supposed to be under Palestinian control under international law.

The best example of the utter disregard of international law was the recent action of the Israeli authorities to expel Palestinians who were performing prayers at the Al Aqsa mosque on the 27th night of Ramadan.

Their objective was to allow a group of Jewish extremists to enter the mosque area to hold celebrations in conjunction with ‘Jerusalem Day’ which commemorates the Israeli takeover of East Jerusalem in May of 1967.

Despite the brutal and murderous attacks by the Zionists, Palestinians have long continued to refuse to surrender to the Israeli efforts to eradicate Palestinian identity on their own land.

Unfortunately for Israel, whenever it launches those attacks, the support of the general public towards it, especially in the United States, will be severely eroded. This is because news on the wanton killings of women and children is becoming easier to share via the internet.

The major media companies such as the BBC and CNN are not the only sources of news for many people now.

In conclusion, blaming the Palestinians for their current sufferings is completely unjustified. It is akin to blaming a robbery victim for the injury he received in his efforts to fight off robbers who had broken into his house to harm him and his family.

What should instead be the target of our condemnation is the party who initiated the tragedy.

In the context of Palestine, what we need to do is condemn the Zionists who were the ones who started the problem when they came to colonize Palestinian lands, and who are still committing grave human rights violations against Palestinians.

Condemning the victims, that is the Palestinians, will be tantamount to complicity in the violations of their human rights.