The cost of France’s commitment to freedom of expression is the alienating of Muslims. 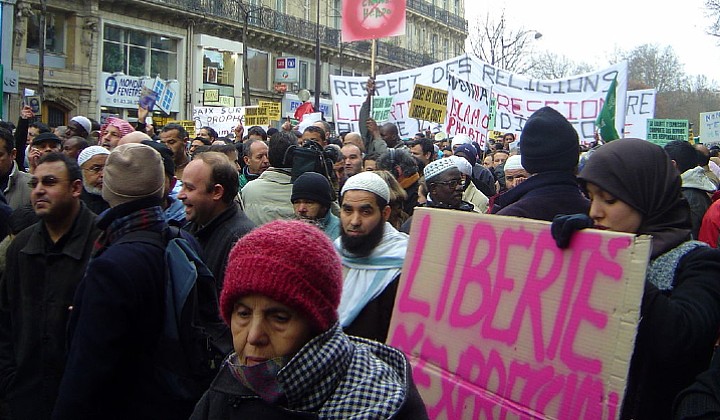 It’s been a deadly and grim reckoning for European liberal societies these past few weeks. The first domino fell on Friday 16 October with the gruesome beheading of French teacher Samuel Paty near his school by an 18-year-old Chechen refugee. French authorities have claimed a direct link between the killing and a social media campaign which targeted the history teacher for showing the infamous Charlie Hebdo caricatures of the Prophet Muhammad in a lesson on freedom of speech.

Since then the dominos have continued to drop, accelerated by early statements such as President Emmanuel Macron’s who vowed to defend freedom of speech but without sufficiently recognising the strong offence provoked by the caricatures. Despite (or perhaps because of) the announcement of additional measures to combat radical Islam, another related attack occurred in Nice just under two weeks after Paty’s killing. Earlier this week, a similarly motivated shooting occurred in Vienna.

Unsurprisingly, President Macron’s initial response has also sparked backlash from the Muslim world. Turkey, Pakistan, and Iran have condemned him, while Gulf States such as Qatar and Kuwait have launched a boycott of French goods. 50,000 people reportedly took to the streets in Bangladesh and 3,000 in Indonesia in massive rallies to protest the caricatures and France’s handling of the issue.

A worrying second wave of Covid-19 may have dampened the appetite for demonstrations in  Malaysia but leaders such as Tun Dr Mahathir Mohamad and Datuk Seri Anwar Ibrahim have made known their thoughts on the matter, causing the former to have an eyebrow-raising post removed by Twitter (more on this later).

The Vienna attack is unlikely to be the last domino to fall. Judging by the hardened stand taken on in this latest tragedy, further retaliations can be expected, fatal or otherwise. This brings us to our first takeaway from this latest chapter of the Charlie Hebdo saga, namely that free speech exacts an extremely high price in multicultural societies. Therefore, how a country chooses to manage is ultimately a question of compromise between free speech, national security and inter-group harmony.

To date, it is clear that there is little desire to compromise in France. French officials have not only defended Charlie Hebdo republishing the cartoons last September, some have gone further by announcing that a booklet with the cartoons would be handed out to high school students. The cartoons have been elevated into a symbol of France’s commitment to freedom of expression at the cost of alienating Muslims in France, angering Muslims elsewhere in the world and threatening the safety of French nationals at home and abroad.

It would not be a cost that Malaysia, or indeed Malaysians, would be willing to incur had this situation occurred here. Malaysian laws related to freedom of speech prioritise inter-group harmony over unfettered expression. The publication or use of such caricatures would have likely run foul of existing laws against incitement and misuse of multimedia communications.

Our research on hate speech also strongly suggests that the majority of ordinary Malaysians would have rated the cartoons as a clear case of ‘very serious’ hate speech and would have favoured strong response, including censorship.

This would not ‘just’ have been a Muslim response – most of the hate speech samples associated with religion in our study were rated as ‘very serious’ across all ethnic groups. Apart from the sacredness of religion to many Malaysians, we also observed a strong desire amongst respondents to avoid the potential unrest that such statements could trigger.

Much of this is due to Malaysia’s unique ethnic composition and historical context. By the same token, understanding France’s context is essential in understanding its leaders’ reactions today. The freedom to blaspheme is considered a pillar of French democracy since the country separated church and state in 1905. Under very secular French laws, citizens are allowed to challenge religious ideas, no matter how obnoxiously.

Charlie Hebdo’s satirical anti-religious depictions of Islam and Christianity alike has prevailed in most legal cases. However, what is considered to be ‘incitement of hatred’ is outlawed. For instance, film star Brigitte Bardot was fined four times between 1997 and 2008 for issuing inflammatory comments against Muslims.

Even so, the France of 1905 is not the France of 2020 and the question of whether multicultural Western nations can realistically continue to maintain these values is being debated today. France has the largest Muslim population in Europe. A lack of compromise discounts the stigma felt by ethnic minorities, sowing seeds of polarisation and hate crime as shown by many studies.

Our research on Malaysian hate speech lends credence to this ‘cultural discounting’. Malaysians as a whole are relatively aware of what others may find offensive but even so, the targeted group’s sense of offence or fear is often noticeably underestimated by the non-targeted group. The definition of ‘hate speech’ or ‘incitement’ therefore should not be based purely on ideology, but needs to credibly incorporate how the targeted group perceives the statement or the act.

This brings us to our second and final takeaway from this on-going saga: when it comes to religion, the idea of the ‘targeted group’ crosses national borders. The defence of a caricature insulting Islam published in France provokes not only French Muslims but Muslims all over the world. In the same vein, a retaliatory tweet by a prominent leader such as Tun Dr Mahathir can also be read as justification for violent acts of Muslim vengeance such as those in Paris, Nice and Vienna.

In an era of social media dominance, the stance and messaging by political leaders in response to offensive or hateful speech is more critical than ever before. A statement meant mainly for the local electorate could have unexpected ripple effects on a global audience and trigger reactions amongst radicalised groups. It is a new test of statesmanship (including the thoughtful use of Twitter) as well as social media regulation.

It may seem ironic, but in July this year French parliamentarians passed a law to combat online hate speech. If the Charlie Hebdo caricatures were spread online, should they be considered hate speech? Would they have been deleted, as was Tun’s offending post? It’s clear that this very much depends on how countries and social media platforms choose to balance freedom of speech with the costs it exacts. Recognising the costs would be a constructive step forward.

For our part as researchers and Malaysians, we advocate a hate speech categorisation framework that is informed by the targeted groups’ perceptions. Our study into hate speech, which is currently being finalised, outlines such a proposal for Malaysia.

Tham Jia Vern and Nelleita Omar are researching what constitutes hate speech for Malaysians and proportionate responses for it at The Centre, a think tank dedicated to centrist thought.