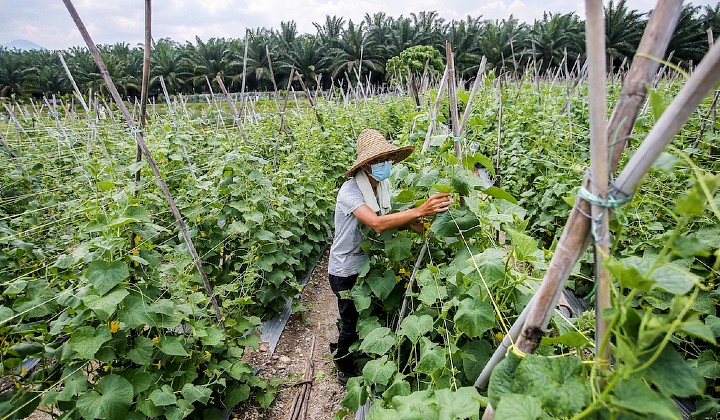 The world has been putting great emphasis on the agricultural sector and food security that are vital for humankind’s survival, especially when it is now being ravaged by the Covid-19 pandemic.

The Food and Agriculture Organisation of the United Nation (FAO) recognizes the severe impacts wrought by the Covid-19 pandemic that affected the food and agricultural sector. It also put forward policy recommendations to mitigate the negative impacts and urged countries to keep the domestic supply chain gears moving and support smallholder farmers’ ability to increase food production.

In Cameron Highlands, Malaysia, most of the farmers have been farming with hard work for decades. Over the years, we have been learning from mistakes and from fellow farmers in order to gradually improve and upgrade our agricultural activities. As such, Cameron Highlands has gradually become the well-known agricultural highland area today because of the blood, sweat and tears shed by all farmers.

However, the governments in Malaysia, both at the federal and state level, performed meagrely in developing our agricultural sector over decades. For instance, even when our economy is shrinking due to the Covid-19 pandemic, the governments had not provided assistance to farmers in Cameron Highlands to face the hardship.

Instead, the Pahang State Government introduced the new Cameron Highlands’ agricultural land lease scheme to maximise its revenue, yet farmers’ rights will be completely sidelined as a result.

As a Cameron Highlands’ farmer, I am deeply disappointed by the Pahang State Government for introducing a land lease scheme for agricultural land that will harm the farmers and undermine our rights.

For many decades, Cameron Highlands’ farmers have been farming but were only given Temporary Operating License (TOL) by the state government. TOL requires annual renewal and thus many farmers have been living in fear that their land will be forcibly taken away by the authorities.

We had been applying for land titles that are more secure, yet our attempts were to no avail. Until recently, the State Government introduced the new land lease policy and established a state-level GLC named Pahang Corporation that acts as a middleman to collect rent from farmers.

Unfortunately, the farmers had been completely kept in the dark throughout the process of formulating the land lease scheme. Without consulting any local farmers for their opinion, the top government officials sat comfortably in Kuantan to devise the whole land lease scheme.

Those who will feel the pain are none other than farmers in Cameron Highlands. As the top government officials were so out of touch with the local farmers, many terms stipulated in the lease are unreasonable and will harm farmers’ rights.

The land lease scheme therefore looks like a carefully devised plan to rob farmers amidst the pandemic to increase the government’s revenue while disregarding the rights and interests of local farmers.

Comparing with the previous Temporary Operating License (TOL) that costs around RM1,000 (inclusive of water bill), the new yearly rent imposed by the government under the new land lease scheme stands at RM4,500. Such a huge increment of rent was indeed shocking. It seems to us that the state government didn’t care about its citizens at all but only intended to squeeze as much profit as possible from us.

Apart from the RM4,500 yearly rent, farmers were also told that some additional fees were not stated in the offer letter but will be incurred, such as legal fees, land survey costs, Malaysian Good Agricultural Practices (MyGAP) certification, sheltered farming permits and so on. By adding all the costs, the yearly levy could be as high as RM10,000 per year!

Plus, the farmers are required to get MyGAP certification for them to renew their contract. I would say all farmers will agree that we should engage in sustainable farming practises in order to maintain high quality of crops while ensuring environmental protection.

However, some of us were told privately that some who have close ties with the state government will be setting up consulting firms to “assist” the farmers with MyGAP certification. The land lease scheme therefore reeks of cronyism as cronies can take this golden opportunity to grab a slice of the cake under this new land lease scheme.

Is the short lease term a political tool for voter intimidation?

The previous TOLs were often used as political bargaining chips by the then Barisan National (BN) government for voter intimidation purposes, as TOLs require annual renewal. The farmers were rendered helpless as they were always being threatened that their land could be seized by the government anytime if they do not vote “correctly”.

Under the new land lease scheme, the lease term offered to us is 3+2 years, which is slightly better than our current TOL that requires annual renewal. However, 3+2 years of lease is rather short and still doesn’t provide us with land security. Understandably, the farmers will still be afraid that the government will one day seize their agricultural land due to political reasons.

Farmers had been applying for land titles for years in hope that the government can provide us with land security. However, the government never gave us a glimpse of hope but only utilised land use licenses as political bargaining chips.

Now, the government even introduced the new land lease policy that will serve as yet another political tool for voter intimidation to deter Cameron Highlands farmers from supporting the opposition.

Pahang state gov’t made baseless and sweeping generalisation about farmers

Datuk Abdul Wahab Mohamad Ali is the political secretary to the Pahang Chief Minister. In that article, he claimed that based on some so-called statistics from the Agriculture Department, farmers can get a yearly revenue of RM120,000 with an acre of land. Hence, all farmers will be able to afford the expensive rent imposed by the government.

I am baffled by Datuk Abdul Wahab’s sweeping claim that all farmers are so rich. Can he, as an experienced and senior government officer, show us clearly which statistics he was referring to? Is he aware of the differences between large farms and small farms as well as the difference of profit that could be generated by the two types of farms?

Also, if it were true that all farmers can become so rich by farming, I would like to challenge Datuk Abdul Wahab and anyone who wants to get rich in no time to be a farmer. After all, why are you wasting time to work in cities if you can easily join the ranks of the wealthy by just farming?

Now, the Pahang State Government appears to be allured by the potentials of Cameron Highlands’ agricultural sector and thus attempts to rob the farmers by any means necessary. Its revenue will surely increase handsomely, but will the small farmers be able to weather the storm?

Jack Liu is a vegetable farmer in Cameron Highlands, Malaysia who is concerned about land issues which affect the whole agricultural sector.