Selangor closed its recreational forests due to the monsoon. 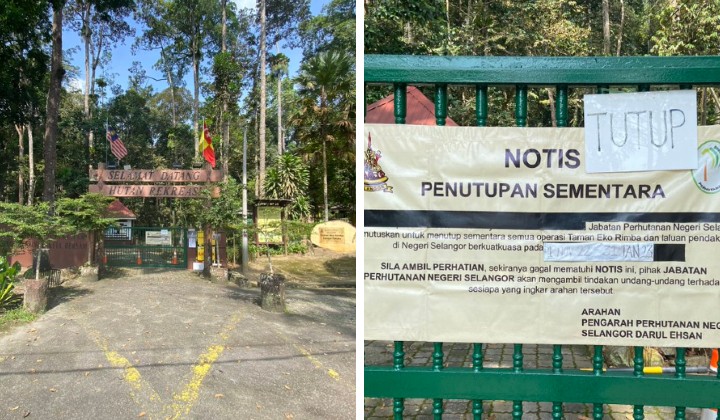 The Selangor State Forestry Department (JPNS) has announced the reopening of Taman Eko Rimba and climbing activities in the state starting 1 February.

JPNS on the requirement for hikers.

PNS also informed that it is compulsory to use the service of guides starting on the same date.

The use of guides is compulsory in 18 hiking areas, and climbers must also have a permit to climb.

In December last year, JPNS issued a notice to close all picnic spots, campsites and recreational forests following instruction by the state government.

The move came in the wake of the Batang Kali landslide on 16 December last year, which claimed the lives of 31 out of the 92 people involved.

Meanwhile, it is noted that the list covered mountains located in Pahang, near the border with Selangor, such as Gunung Ulu Kali and Bukit Cin Cin.

The mountains are believed to involve private land, and hikers are advised to check so they would not trespass into the land of others.

A case example is the situation in Gohtong Jaya near Genting Highlands.

According to locals, many irresponsible parties make money by offering hiking services, claiming to have permits when they do not.

Meanwhile, the public has not received the announcement on making permits and guides compulsory.

Many feel it is troublesome as the permit can only be applied manually at the forestry offices some days before the hike.

Some disputed the need for guides on certain tracks, which they said are easy to hike.

Naturalist, bird guide, and ecotourism advocate Andrew Sebastian said the authorities must ensure that guides are trained and well-prepared for the job.

Hiring an experienced guide will save time and ensure hikers find the best spots.

Sebastian, who heads the Ecotourism & Conservation Society Malaysia (ECOMY), said hikers are encouraged to give feedback to their authorities now that the service is compulsory.

It is important to have a guide who can educate and engage and are authorities on their destinations. They are also trained to read and mitigate risky situations.

Naturalist, bird guide, and ecotourism advocate Andrew Sebastian to TRP on the importance of guides.

At the same time, he reminded hikers not to litter the outdoors and keep it clean.

Last Victim Of Batang Kali Landslide Found, A Recap Of The 16 Dec Tragedy