Most ATMs provide RM10 denominations, while some only dispense RM50. 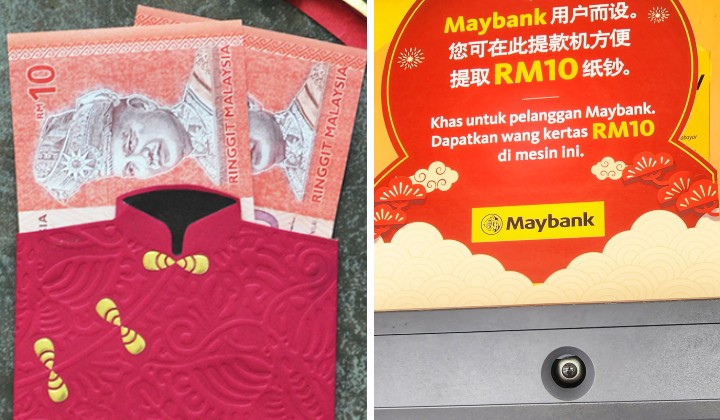 It has always been a tradition to give new notes during Chinese New Year.

The banknotes are primarily in denominations of RM10 and RM50.

I haven’t done mine yet, if you happen to have excess new notes, may I exchange them with you? ☺️

For Maybank, most branches only have only one denomination.

Maybank provided a list of branches and the denominations available for the public’s convenience.

The new notes will be available for withdrawal until 24 January 2023.

Someone please enlighten me what’s the point of getting new notes for CNY. I think it’s a waste of resources LOL

However, those looking for fresh RM50 notes can only get them at selected ATMs in Menara CIMB and Suria KLCC (Petronas Tower 3).

At the same time, ATM withdrawals are generally fast, but they could take a long time due to the long queues.

A customer needs a much longer time if they’re withdrawing a considerable amount, especially for RM10 denominations.

The reason is that the ATMs can only dispense a maximum of 30 pieces in a single transaction.

At the same time, other banks, such as Hong Leong, are providing new and fit notes over the counter.

Fit notes are used currency notes that are typically clean and good enough for recirculation, including for festive gifting.

Remember that over-the-counter services for exchanging notes are usually only available during certain business hours.

Those who want to exchange bank notes for CNY angpow can do so – Maybank started today, 10am – 12pm every day until the stock of notes run out. It's recycled notes. Mix of some new notes. First come, first serve. Line up at counter. pic.twitter.com/ubex7lTGPS

A way to avoid wasting time is to call the bank to reserve some notes before heading over.

Some banks might only accept requests for new notes via pre-booking through the respective bank’s online reservation system.

Over the years, many have taken to social media to voice their frustration when they were unable to get their hands on new banknotes.