Goh away her jacket and racket to fans at Axiata Arena. 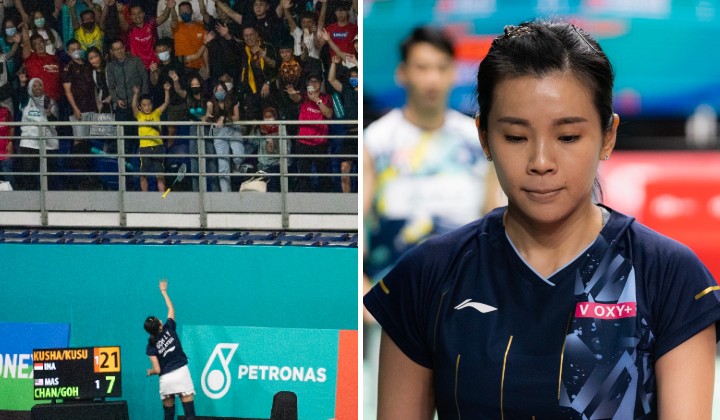 She bowed out against Indonesian pair Rehan Naufal Kusharjanto and Lisa Ayu Kusumawati in the preliminary round of the 2023 Malaysia Open at Axiata Arena, Bukit Jalil.

The duo made history by being the first and only Malaysian to win the mixed doubles silver medal at the 2016 Rio Olympics in Brazil.

Together, they have played for the Malaysian national team since 2008.

Goh was touched by the reception given by fans at Axiata Arena despite the defeat.

I was so touched that they kept calling my name; I’m so thankful for their support. It’s been an incredible journey.

As a token of appreciation, Goh gave away her racket and jacket to fans at the end of the game.

The 33-year-old, who competed in three Olympic Games, said her sweetest moment was winning the silver medal in Rio.

Her many other achievements include podium finish at All England and Asian Championship.

She has been consistently ranked among the top 10 mixed doubles players in the world with Chan.

In 2018, she and Chan left the Badminton Association of Malaysia (BAM) to turn professional.

The pair parted ways in 2021 before reuniting for the finale at this year’s Malaysia Open.

Her unique and refreshing presence is reflected in her nickname “Malaysia’s badminton goddess.”

Meanwhile, she said her father should be most relieved now that she has finally played her last game.

Throughout her career, Goh sustained aggravating injuries and had to undergo surgery and rehabilitation.

My dad has been worried that I would injure myself.

On her plan, Goh said she would continue to be involved in badminton-related activities.

Chan, who left BAM for the second time in 2022, will continue his professional career with Cheah Yee See.

It is one of only four Super 1000 tournaments, the most prestigious badminton event by the Badminton World Federation (BWF).