The National Bukit Jalil Stadium can seat around 80,000 people but it will be limited to 59,000 seats to make way for Jay Chou’s concert preparations. 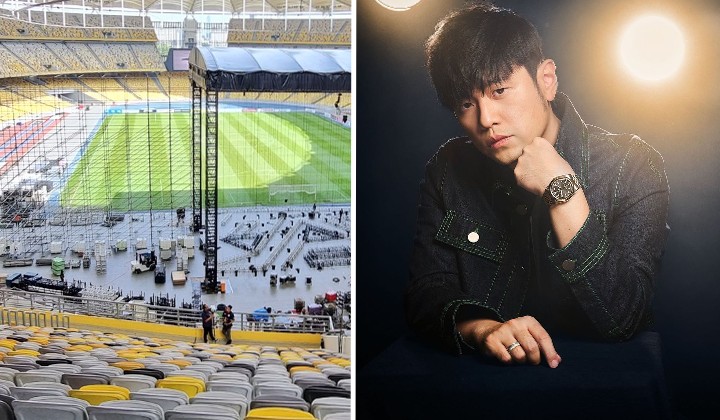 Harimau Malaya fans, better known as Ultras Malaya, have been bombarding Taiwanese singer Jay Chou’s social media accounts with hateful comments due to the shortage of seats at the Bukit Jalil National Stadium (SNBJ) for the first leg of the AFF Championship semifinal between Malaysia and Thailand this Saturday (7 January).

The stadium is unable to accommodate football supporters to its capacity of 80,000 seats with only 59,000 seats made available. This is because 21,000 seats are closed off to accommodate stage structure preparations for Jay Chou’s concert. Jay Chou will be coming to Malaysia for his Carnival World Tour on 15 January.

Even though Jay Chou’s concert venue had been booked since 2019 with tickets already sold out, a large number of hardcore football fans took to blaming the King of Mandopop over limited seats for the AFF match.

They flooded Jay Chou’s most recent Instagram post with rude comments asking him to postpone his concert or hold it elsewhere as according to them “a stadium is not the place for a concert”.

“I don’t like concerts… I like football. Go and do your concert in another place. There’s a lot of Covid these days. Postpone your concert to next year,” said one user.

“Just because of you, Malaysian football fans can’t get the 21K seats,” said another.

Some of the football fans were even mad with the fact that his concert is next week and the stage is already up this week, without realizing that an international concert preparation takes weeks of safe and sturdy installation.

Meanwhile, other Malaysians also rose to the case and defended the King of Mandopop saying that it was not his fault at all, instead, this is the fault of the organiser who did not plan properly and early enough.

She then gave a statement saying that the stadium booking for the Jay Chou World Tour was done on 13 March 2019 while FAM did the AFF 2022 booking on 18 August 2022.

The concert needs 14 days to set up the stage for the show which is handled by 500 crew members including 185 international crew members, 45 heavy machineries, 200 speakers and 800 lights. In fact, they have already delayed the preparation by 2.5 days to accommodate the AFF Cup.

This is due to Jay Chou’s concert too, held on 17 & 18 December and because of that, the stadium’s organizer couldn’t make arrangements to prepare the field and dressing room facilities in a short period of time.

Other than that, Thailand fans also sympathized with Malaysian football fans as they will also face the same predicament in the second leg of the AFF Championship semi-finals between Malaysia and Thailand. The match will be done in the Thammasat Stadium which only seats 25,000 people instead of the Rajamangala Stadium which seats 51,000 people.

This is due to the bigger stadium that made way for a Maroon 5 concert last month and is making way for a KPOP concert this Saturday. The grass on the fields could also not be restored in time for a football match.

We get your feeling my friends. 😅

Rajamangala is not available because its grass was ruined by Maroon 5 concert last month and there will be a KPOP concert again this Saturday. As well as the National Stadium that Blackpink concert will be take place here this weekend. https://t.co/eLQWcV10gn pic.twitter.com/VBAqRGeJV3