Saiful Hadee Amar regretted his action, saying he never meant to hurt them, just wanted to motivate his players. 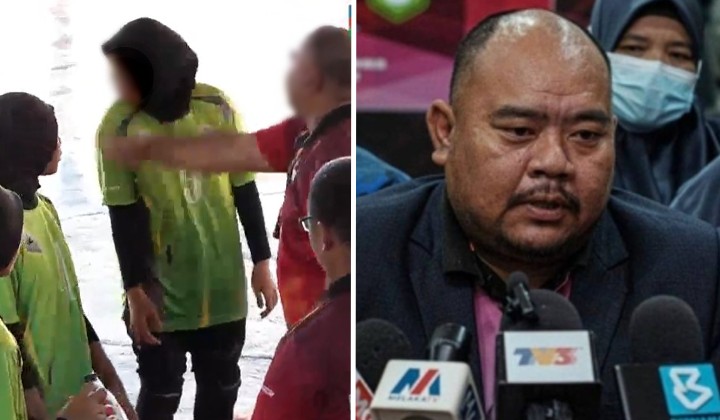 Saiful Hadee Amar, the volleyball coach in Melaka who was seen in a video slapping two underage female athletes in public, last night apologised publicly for his action.

According to Bernama, the 44-year-old man regretted what he did and was willing to face the repercussions of the incident that happened on 16 December.

“The training that I (handle) has various types including psychological, intensive and physical approaches in shaping the players.

“However, I did not intend to take action which caused injuries… my action is to fire their spirit and motivate them in each match.

“I wish to apologise to all players especially the two players involved, the parents, my own club Mastanah and the Malaysian Volleyball Association (MAVA) as well as the volleyball community in Malaysia,” he said in a press conference at the Melaka State Sports Council (MSN) office in Krubong here yesterday.

The parents of the two athletes involved – Abd Halim Bakar, 50 and his wife, Hartini Wagimun, 48, as well as Mohd Ismail Mohd Daud, 43 and his wife, Rohayu Mohd Dahlan, 35, were present at the press conference.

Earlier on 3 January, Abd Halim pleaded for the public to stop antagonizing the coach as he himself and his 14-year-old daughter had already forgiven him. He wished for Saiful Hadee to still remain a volleyball coach.

I do it to raise their spirit as a player to fight for every victory… the players are my family and my source of strength, without them I cannot be a coach.

I am prepared to face any decisions which will be imposed on me. I hope this will be a lesson for myself

Decisions will be taken after the investigation is complete

Shanmugam said that all decisions will be made by MAVA after the association’s investigation with the Ministry of Education (MoE) is completed.

Among the actions that can be taken against him is either suspending or terminating his service as the coach of the Melaka U-14 (women) volleyball team.

Despite the apology and understanding between the coach and the parents, the issue needs to be properly investigated as it has received the attention of various parties.

The coach’s position is divided into several levels, firstly the investigation by the state government over the viral video. Secondly he also served the Ministry of Education, so its Integrity Unit will conduct further investigation.

Shanmugan also wishes for the public to stop magnifying the issue as it indirectly disturbs and affects the emotions of both players.