After the uncomfortable LRT Kelana Jaya line ride, the Transport Minister says he will meet up with Prasarana’s management this week to discuss improvements. 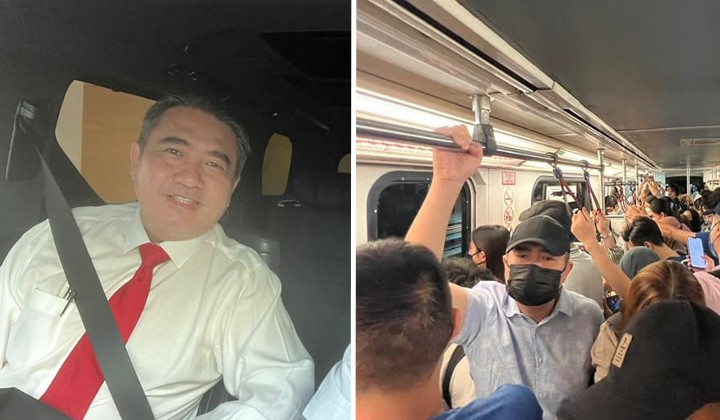 After being appointed again as the Minister of Transport last Friday, Anthony Loke Siew Fook goes on and does his job the next working day.

Yesterday, he shared on Facebook that he took a ride on the LRT Kelana Jaya line, undercover, during peak hours which was between 5 pm and 7 pm. He discovered that the ride was packed and uncomfortable for the passengers.

He said he didn’t alert the media or the management of his ‘spot check’ because he wanted to get a feel of what it was really like for commuters. With a black cap and his mask on, he went incognito mode and experienced first hand how cramped it was for the public to face this situation every day.

Will meet with Prasarana’s Management

Now that he knows what it feels like to be packed like sardines in the LRT, he then decides to meet up with LRT’s management, Prasarana Malaysia Berhad.

He shared on his Facebook right after the ride that he’ll go on a meeting with the higher-ups in Prasarana sometime this week to discuss how the situation can be improved.

Netizens are impressed with how low-key and fast Anthony Loke is at his job. Besides, it’s not the first time he’s been the Transport Minister.

Anthony Loke reunites with his driver after being reappointed

Since his reappointment as the Transport Minister again under Pakatan Harapan, Anthony Loke expressed his excitement in reuniting with his chauffeur, named Hazril.

Previously when he was also the same minister from 2018 to 2020, he shared that Hazril was a very good driver with impeccable time management skills. He was always early and had never been late for any meetings or events thanks to the punctuality of his driver.

After the collapse of PH’s administration in 2020, Anthony Loke wrote a post in March 2020 expressing his gratitude to have worked with Hazril. He appreciated Hazril’s efforts in driving him around and wished the latter all the best. Little did he know that he was going to be working with Hazril again in the future.

Flash forward to 3 years later, and he is again reunited with his favourite pilot, Hazril. Turns out good things come in unexpected ways.

He shared the happy news on Facebook yesterday with a selfie with Hazril. In a quick PSA as the Transport Minister, he reminded the public to always wear their seatbelts whether they’re seated in the front or at the back.

Transport Minister or not, don’t forget your seatbelts, everyone!