Anwar took to social media to say that he had declined the use of a Mercedes-Benz S600 limousine purchased by the Prime Minister’s Department prior to his appointment. 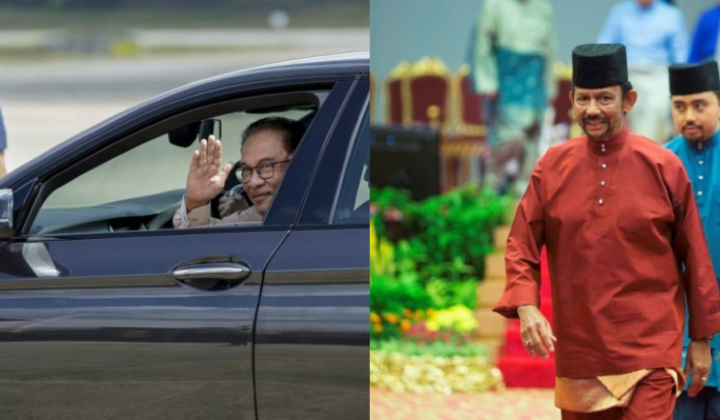 Cars dominated social media conversations over the recent long weekend, beginning with the Sultan of Brunei who surprised everyone by getting behind the wheels himself and driving Prime Minister Datuk Seri Anwar Ibrahim to Seri Perdana in Putrajaya upon the former’s arrival for a visit here.

Sultan Hassanal Bolkiah decided to drive the car himself after arriving at the Royal Malaysian Air Force base in Subang, with Anwar in the front passenger seat.

According to Bernama, Pengiran Muda Abdul Mateen Bolkiah, the Sultan’s son, was also in the vehicle.

The vehicle, a BMW, was escorted to Putrajaya from the RMAF base 41 kilometres away by a team of outriders and security vehicles.

Anwar was present to greet the Brunei ruler and his delegation earlier. Zuki Ali, the Chief Secretary, was also present.

The army’s guard of honour, led by Faudzi Che Hashim, was observed by the sultan.

Anwar and Sultan Hassanal had their first encounter following Anwar’s election as the tenth prime minister.

Malaysia and Brunei have a longstanding, special relationship based on their shared heritage, culture, and interpersonal connections.

Still on the subject of cars, Anwar took to social media to say that he had declined the use of a Mercedes-Benz S600 limousine purchased by the Prime Minister’s Department prior to his appointment.

He had stated that no new official car would be purchased for his use, and that no renovations would be carried out at his office, as part of a new culture against wastage of public funds that everyone must practise.

The Mercedes has not arrived yet, so I’m using this (Toyota Camry), okay? (I’ll just use) any car that’s available

he said in jest to reporters outside PKR headquarters here where Anwar, as Pakatan Harapan chairman, attended a coalition meeting.

Actually, this (the S-class Mercedes) was ordered by a previous prime minister, but I checked to see whether we could cancel. (Thankfully) we could.

According to Berita Harian, the purchase of the Mercedes was proposed during the Tan Sri Muhyiddin Yassin administration and then approved by Datuk Seri Ismail Sabri Yaakob’s administration.

Not only Anwar, but Ismail Sabri also rejected the new government car

Anwar’s refusal to use the Mercedes-Benz S600 limousine however was nothing extraordinary, said Datuk Ruhaidini Abd Kadir.

The former Director of Media and Strategic Communications to Ismail Sabri said the latter had also once refused to use the bulletproof vehicle provided by the government for him.

He stated that Ismail Sabri also refused to approve the application to modify the special aircraft (Perdana 1) for the Prime Minister’s official use.

Ismail Sabri also continued to live in a private house and chose not to move in to Seri Perdana, even though the Prime Minister’s official residence had been renovated.

Throughout his tenure as Prime Minister, Ismail Sabri was more comfortable using the multi-purpose vehicle (MPV) used by the previous administration