Malaysia is important because of its strategic location in the geopolitical tussle between China and the US. 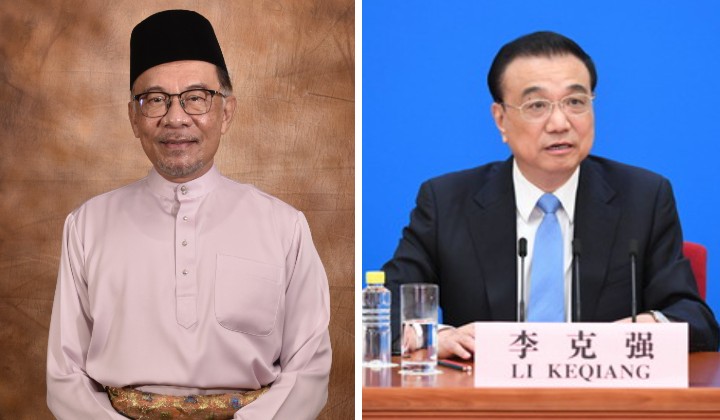 The Premier of China, Li Keqiang, congratulated Datuk Seri Anwar Ibrahim on his inauguration as Prime Minister of Malaysia.

This contributes positively to the security and prosperity of the two countries and the region.

Li added that he is willing to work with Anwar to reaffirm the comprehensive strategic partnership between the two countries.

Li also said that both countries would also jointly move forward towards building the China-Malaysia community by sharing a future for mutual benefit.

Anwar has described ties with China as important and said he would build closer ties with Beijing and China’s rival, the US, and other partners such as the Association of Southeast Asian Nations (ASEAN).

Experts say that Anwar, regarded as ‘pro-West’ and has good ties with US politicians, is likely to take a more balanced approach as prime minister.

The US was, and still is, one of its largest trading partners for Malaysia.

Malaysia must not align with any big powers. Thus, strengthening relation with China is in the interest of our national economy, especially in view of that an economic crisis is looming.

Malaysia has maintained cordial ties with China, which has been Malaysia’s top trade partner since 2009.

Malaysia’s total exports to China recorded USD3.923 billion in Oct 2022, compared to USD4.416 billion in the previous month. See the table below for more data.

#Anwar, #Malaysia's new prime minister, described China as "vital", saying he would strengthen relations with China rather than "maintain the status quo", especially in the fields of economy and trade, investment and culture. pic.twitter.com/N3Y5rzGGXU

As such, the Tambun MP will pay more attention to international matters than his predecessors.

A possible thorn in the relationship between Beijing and Putrajaya is the Uyghur issues in Xinjiang.

In the past, Anwar had spoken out for the Uyghurs over human rights concerns.

READ MORE: Malaysia Has No Opinion On Uyghurs In China, Abstains From UN Vote

Finally we can tag @anwaribrahim on #Twitter about #Uyghur asylum seekers in #Malaysia, who is long opposed to their deportation to #China. Hopefully, he will stay true in his beliefs when he becomes the Prime Minister. pic.twitter.com/8UduwplEif

Meanwhile, the Uyghur community also congratulated Anwar on his appointment as prime minister.

International Union of East Turkistan Organization (IUETO) president Hidayet Oguzhan said the Uyghurs are hopeful that close collaborations can be achieved with the Malaysian government.

We believe in Malaysia values for freedom and democracy in the Asia Pacific region, which has shown credible effort to stand up for the for Uyghur people of East Turkistan for years.

IUETO president Hidayet Oguzhan to TRP on Malaysia being a beacon for democracy.

Hidayet, who recently came to Malaysia on a working visit, said that international communities, countries and institutions worldwide have been addressing the Uyghur cause in recent years.

He added that China is accused of genocide and crimes against humanity, with atrocities committed against the Uyghurs.

As such, when reshaping foreign policy, the Malaysian government should never ignore the ongoing plight of Uyghur Muslims of East Turkistan, said Hidayet.

At the same time, he said the Uyghurs do not want Malaysia to undermine its bilateral relations with China.

Rather we are building a unique relationship that increases the awareness of the globally recognized cause of the Uyghurs.

IUETO president Hidayet Oguzhan to TRP on what the Uyghurs expect from Malaysia.