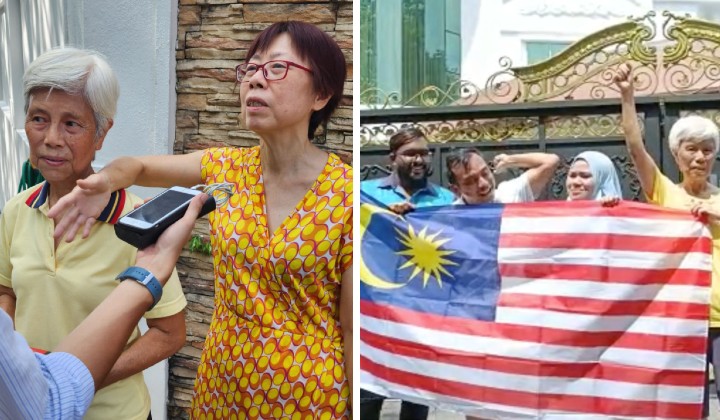 Malay, Chinese and Indian Pakatan Harapan (PH) supporters shouted, “Hidup rakyat! Kita boleh!” (Long live the people! We can!) as the news they had been waiting for finally came true.

The supporters were outside Datuk Seri Anwar Ibrahim’s office in Bukit Gasing when news came that he would be sworn in as Malaysia’s 10th prime minister.

Among them are siblings Angie Ng Bee On,70, and her younger sister Ng Bee Chooi, 63.

The sisters said Anwar came to their house just down the road when their mother passed away some years back.

We feel happy that he became PM. We hope it will be a fair government that can fulfil the election promises.

Siblings Angie Ng Bee On and her younger sister Ng Bee Chooi to TRP on their feelings and expectations.

The Ngs had also reached out to the media camped outside Anwar’s office, handing out cartons of mineral water.

Anwar, who had promised to restore multiracial harmony to a divided nation, will be sworn in as Malaysia’s 10th prime minister at 5 pm today.

Meanwhile, the PKR president is getting congratulations from all over the place on social media.

His wife and fellow MP, Datuk Seri Dr Wan Azizah Wan Ismail, posted a picture of Anwar proclaiming him as the 10th PM, with the caption ‘Alhamdulillah’ (praise be to God).

For a better Malaysia 🇲🇾

( Proud of you my PM @anwaribrahim ) pic.twitter.com/2iBrFq6Vg5

It is hard to overstate the rocky road for Anwar Ibrahim to be Malaysia's PM – once the heir apparent to Mahathir, then jailed by him, came close several times but now has arrived. https://t.co/XHFhibcFT2