Politicians from PH and BN are seen meeting up hours before Agong’s 2pm deadline to name their prime minister candidate today. 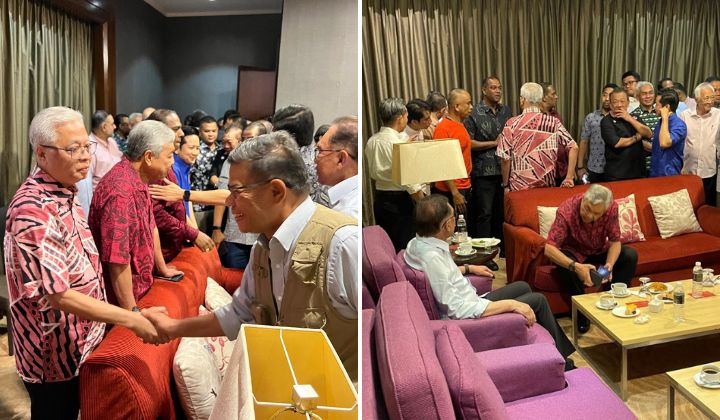 Pakatan Harapan (PH) and Barisan Nasional (BN) leaders have been arriving at Seri Pacific Hotel here since 9am, ahead of the 2pm deadline to name their prime minister candidate set by the Agong.

The meeting’s agenda is not disclosed and a few attendees downplayed its significance when asked by the media.

Jamal Yunos told reporters that he just came for breakfast at the hotel and said he’ll leave it up to party leaders to decide whether they’ll join PH, Perikatan Nasional (PN), or become the opposition.

During a press conference, BN chairman and UMNO president Datuk Seri Ahmad Zahid Hamidi said there are 26 BN MPs at the hotel. Four MPs are absent, including two who are unwell.

He also said any letters signed by MPs in support of any Prime Minister candidate are void.

In the meantime, he said any claims that BN is cooperating with any political parties or supporting any Prime Minister candidates are false.

He said the 30 BN MPs are bound to the decisions of BN leadership in such matters.

Zahid Hamidi also asked for more time from the Speaker of the Dewan Rakyat.

The Speaker, Tan Sri Azhar Azizan Harun, gave political party leaders until 2pm today to declare their alliances and for whichever alliance had the majority seats in Parliament to pick the Prime Minister.

Sembrong MP and BN treasurer Datuk Seri Hishammuddin Hussein said he stands by his rejection of Anwar and DAP, and is willing to be expelled from UMNO because of this.

Sources inside DAP and UMNO say an agreement has been reached between BN and PH.

Caretaker PM Ismail Sabri also arrived at Seri Pacific hotel . It’s a party decision not just the president alone . On agenda is whether BN should throw their support to PH to form the next government . This is intense ! https://t.co/FKYtgWLNxd pic.twitter.com/Zl0in7g4Vc

Earlier, Ahmad Maslan confirmed that 30 BN MPs are arriving for the meeting with PH leaders, but did not confirm what was going to be discussed. https://t.co/TShgJxd8UW pic.twitter.com/QAYREVA8WC

At 10.30am, @anwaribrahim arrives at the Seri Pacific Hotel. pic.twitter.com/TYSqAejnIg