We bring you live updates of the unofficial results for the 15th General Election (GE15). 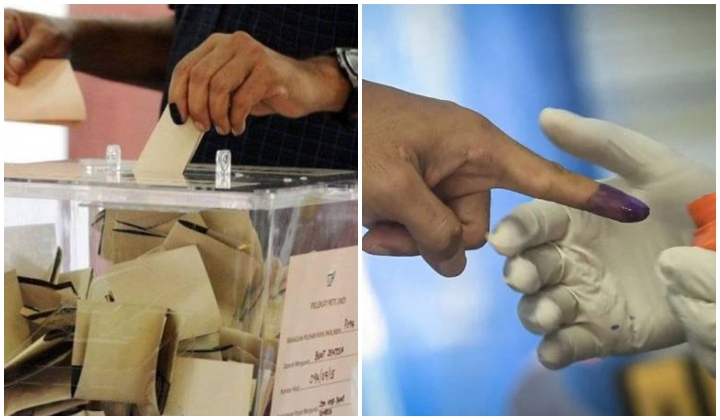 5.00am: The Election Commission says the result for the Kota Marudu parliamentary seat cannot be announced due to weather conditions. Other Parliamentary seats that will be settled at a later date are Padang Serai and Baram.

2.13am: With 29 more parliamentary seats to be announced, it looks like no one coalition can secure a simple majority to form the government.

1.44am: [STATEMENT] BN chairman Ahmad Zahid Hamidi has released a statement saying they will set aside their differences to form a stable government.

“BN considers the result of GE15 as a major signal given by the rakyat towards us.

“However, BN will continue being committed and contribute to seeing that a stable government can be formed, we are ready to set aside our previously differing sentiments.”

He added that BN is committed to a good relationship between the Peninsular states, and Sabah and Sarawak, and are willing to be the bridge that strengthens this relationship.

11.35pm: “Azmin” trends on Twitter as takes the lead in Gombak. Some netizens are also seen raising questions about a blackout that occurred at the counting station there.

11:17pm: “Nurul Izzah” trends on Twitter as netizens discuss the possibility of the PH candidate losing in Permatang Pauh, a seat that has previously been held by both her parents Anwar Ibrahim and Wan Azizah Wan Ismail.

10:38pm: “Mahathir” is trending on Twitter as netizens discuss if the two-time PM will lose a parliamentary seat for only the 2nd time in his political career. The first was in 1969 during GE3.

10.23pm: Tenaga Nasional says there was a blackout in Gombak, but it was not due to a power cut.

10.10pm: FMT reports that Anwar has taken over the lead against PN’s Faizal Azumu In Tambun.

9.12pm: PH’s Amirudin Shari leads the race in Gombak with 12,687 votes, while former PKR man and current PN candidate Azmin Ali is in second place with 8,157 votes. BFM reports that Megat Zulkarnain (BN) is third with 5,220 votes while Jamaludin Md Tahir (GTA) and Independent candidate Zulkifli Ahmad is in fourth and fifth place with 401 and 92 votes respectively.

9.02pm: MalaysiaKini reports that PH has unofficially secured seats in Bagan, Tanjong and Bukit Mertajam in Penang, as well as the Bukit Bintang seat in Kuala Lumpur.

DAP Chairman Lim Guan Eng won his seat in Bagan while his sister, Lim Hui Ying won the seat in Tanjong. Over in Bukit Mertajam, Steven Sim emerged as the winner while Fong Kui Lin won in Bukit Bintang.

8.46pm: In Petra Jaya, MalaysiaKini is calling it an unofficial win for GPS’ Fadillah Yusof with around 45,000 votes which is more than 50 per cent of the the votes. PH’s Sopian Julaihi is reportedly in second place with around 11,000 votes.

8.47pm: PN candidate Mohd Rashid Hasnon is losing the race in Batu Pahat with 15,618 votes against PH’s Onn Abu Bakar who is leading with 29,591 votes. Barisan Nasional is in third place with 12,972 votes, while PRM only received 196 votes.

MalaysiaKini reports that 61% of the votes have been counted.

8.31pm: PH Segambut candidate Hannah Yeoh says that the party can’t share the results for the constituency because Presiding Officers do not want to sign Form 14.

According to MalaysiaKini, Form 14 is also known as the ‘Voting Statement Form After the Counting of Votes’, and shows the number of votes counted.

The form needs to be signed by the Electoral Officer at the polling station to confirm the vote count.

8.20pm: In Langkawi, MyUndi says that BN’s Armishah Siraj leads with 1,693 against PN’s Mohd Suhaimi Abdulllah with 1,400, followed by PH’s Zabidi Yahya with 269 and Pejuang’s Mahathir Mohamad with 222.

8.18pm: Awani reports that in Muar, MUDA’s Syed Saddiq is ahead with 7,667 votes, but other candidates aren’t far behind with PN’s Abdullah Husin already having 5,466 and BN’s Mohd Helmy Abd Latif having 4,514.

8.14pm: Awani reports that in Pandan, PN’s Muhammad Farique Zubir Albakri has 764 votes, a small lead against PH’s Rafizi Ramli who has 695.

8.13pm: Malaysiakini reports that in Gombak, PH claims its candidate Amirudin Shari has 8,980 votes against PN’s Azmin Ali, who has 5,991.

8.04pm: Awani reports that PH’s Akmal Nasir has the lead in Johor Bahru with 4,063 votes so far. There are 136,368 registered voters in the parliamentary constituency.

8.00pm: Awani reports that PH’s Lim Lip Eng has an early and comfortable lead in Kepong with 1,804 votes while other candidates are still in the double digits. However, the constituency has 94,285 voters.

7.42pm: Behind the scenes – take a look at the Election Commision’s live coverage of what happens after polls close.