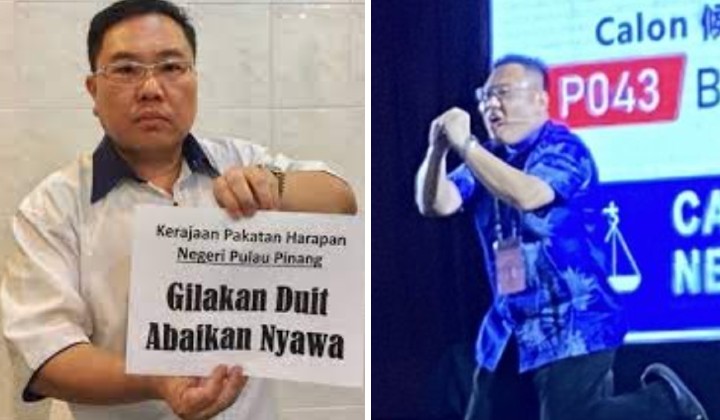 As the 15th General Election (GE15) draws closer, some candidates are pulling out all the stops in their attempts to get votes.

Barisan Nasional (BN) candidate for Bagan, Tan Chuan Hong, got down on his knees during a ‘mega ceramah’ by MCA.

After he knelt, he held his hands together.

Tan faces an uphill task in the parliamentary seat as he takes on DAP chairperson Lim Guan Eng in a four-cornered fight.

He took Lim to task on various issues in his speech, including the subsea tunnels and Sg Dua toll station.

According to Sin Chew, the ‘mega ceramah’ was recently held at a clan temple in Seberang Perai.

About 250 people were in attendance, but the crowd gradually decreased as the event went on.

Tan is not the only MCA candidate who has tried “begging” for votes during the GE15 campaign.

MCA’s Parliamentary candidate for Indera Mahkota, Datuk Quek Tai Seong, cried and begged voters for their support during a huge dinner in Kuantan.