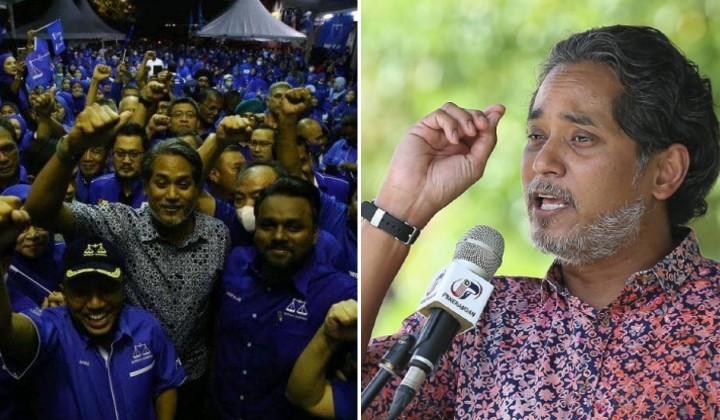 During a recent political rally, the former Health Minister commonly known as KJ declared his intentions of taking the reins but concedes that it will take some time before he can lead the country.

His focus right now is to win a Parliamentary seat and says that he has time to wait for the post, but mentions that he doesn’t want to wait for too long.

Khairy claims this is the first time that he had declared his intention out loud and added that his party’s leadership would “cut him off” for saying it, FMT reported.

He even took a few swipes at other politicians questioning their credibility to lead when they are afraid of contesting in difficult areas.

I’m ready, but I must first prove it in Sungai Buloh. If the people here support me, I can inform my party people and then I will enter the dragon’s den.

Before he found himself fighting in Sungai Buloh, Khairy represented Rembau and was the Youth and Sports Minister, and then the Science, Technology, and Information Minister before becoming the Health Minister.

His time at MOH includes his push for the Generation End Game (GEG) bill, which he said he will retable if he is re-elected back into Parliament, FMT reported.

He also brought medical marijuana (figuratively) to the Dewan, supporting the use of marijuana, and marijuana-related products for medical purposes.

Does he fit the bill as Prime Minister? Some may argue that he might not be the candidate that can lead Malaysia forward.

What say the naysayers

Those who were critical of KJ pointed out that he is just like any other politician because he too has his fair share of controversies.

The issues revolve mainly around his involvement with MySejahtera, the backing of Former Prime Minister Datuk Seri Najib Razak during GE14, and his affiliation with and standing within UMNO and Barisan Nasional (BN) in general.

UMNO member and former UKSB Director Wan Quoris Shah Wan Abdul Ghani testified that around RM50,000 and RM200,000 were given to KJ through the Rembau Umno division for official political, humanitarian and social purposes managed by the party, Malay Mail reported.

It was also reported that the initials “KJ” appeared in a ledger owned by UKSB.

Khairy’s popularity within UMNO hasn’t been glowing either with members like Datuk Dr Mohd Puad Zarkashi publicly voicing their criticisms saying that KJ was instrumental in influencing Former Prime Minister Tun Abdullah Ahmad Badawi, who is also KJ’s father-in-law to step down from his post.

He recalled a time when the infamous “fourth-floor boys” – a team of advisors to the Prime Minister was allegedly spearheaded by KJ when Pak Lah was in charge.

It was reported that Mahathir handpicked Abdullah to take over the reins after 2003 but the relationship became sour with the fourth (and seventh) Prime Minister launching a series of criticisms which led to his resignation in 2008.

Besides that, KJ has also been embroiled in a few more controversies over the years such as the RM100 million scandal during his time as Youth and Sports Minister and the ECM Libra scandal which is still being used as ammunition by his rivals.

Only time will tell if Khairy will one day become Prime Minister, but his first hurdle is the seven-cornered fight in Sungai Buloh.